Serravalle will expand to open a further 70 new stores, building its position as one of Europe’s top fashion destinations, and a great day out from nearby Milan. The existing centre will also be refurbished as part of the investment – with no disruption to opening hours.

At €115 million, this is the largest investment in the centre since McArthurGlen, the Group that brought designer outlet retailing to Europe, opened Serravalle in 2000 as the first designer outlet in Italy.

Since 2004, the centre has been owned by the European Outlet Mall Fund (EOMF), managed by TH Real Estate and in which McArthurGlen is also an investor. McArthurGlen continues to be the centre’s development, leasing and managing agent.

This latest expansion has been made possible following the signing of a joint venture between EOMF and Aedes Commercial Property Group.

“Serravalle Designer Outlet has become an international tourist destination. With this new investment, we will be creating an even higher level of excellence, just 50 minutes away from the global city of Milan, and offering the c.5 million customers who visit the centre every year, an even greater choice of the most-loved names in fashion.”

“Serravalle is the European Outlet Mall Fund’s largest asset and one of our best-performing properties. The excellence of the tenant line-up and the customer experience at Serravalle, together with the strength of McArthurGlen’s expertise as Europe’s leader in designer outlets and that of our Italian partner Aedes Spa, continues to prove a winning combination for our investors. We are convinced that the expansion and the improvement of Europe’s leading luxury designer outlet will lead to even higher investment performance.”

More than half of Serravalle’s sales (51 percent) are currently attributed to intra-European and long-haul tourists. Tax-free sales, which account for just over a third of total sales, have increased by 250 percent over the past five years (2010-2014).

The centre is particularly popular with Chinese shoppers, whose sales were up 45 percent in 2014, compared with the previous year. The centre has also welcomed increasing numbers of tourists from South Korea and Southeast Asia, in particular from Malaysia and Indonesia.

“The international shoppers are particularly attracted by the top luxury names, and by the authenticity and ease of what is a premium shopping experience, with a full programme of events and activities, including our renowned annual Summer Music Festival. The more than 10 million residents who live within a 90-minute drive of the designer outlet are also a very important market. We believe there is not only the potential to grow the tourism market, but that this is also a very exciting time for people living locally.”

The expansion will add a further 12,500m² of retail space to bring the total to 51,500 sq m. Together with the refurbishment of the existing centre, works are due to start later this month (June), with a planned opening of the extension for autumn 2016.

The architect for both new phases is Florence-based Hydea SpA. 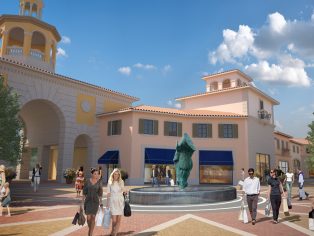