In the last few years, LED light sources have evolved at a considerable rate, bringing the benefits of improved efficiency, higher light outputs and longer life. A further advantage is that they are highly controllable compared to many other light sources. As a result, their specification for outdoor lighting projects is growing.

However, LED light sources are very different from the high intensity discharge (HID) lamps traditionally used in such applications – such as high pressure sodium and metal halide light sources. To gain the maximum benefit from LED lighting, specifiers and end users need to understand these differences.

One of the most important factors is that there can be considerable variation between LED light sources from different manufacturers so it’s important to be clear about what light output to expect.

With LEDs, the power consumption is no longer a useful indicator of the lumen output. In fact, this can vary considerably between manufacturers so thinking just in terms of lumens and LORs is not helpful when specifying LED lighting. A far more meaningful criterion is ‘useful lumens’ as this gives a clearer indication of the lighting performance that can be expected.

One reason for this is that LED light sources are inherently directional sources, offering better optical control than traditional sources like fluorescent and metal halide lamps. This allows properly designed LED luminaires to direct light where it is needed, efficiently achieving desired illumination levels and uniformity. As a result, it is possible to have an LED luminaire with a lower lumen output and lower installed load than another LED luminaire, yet deliver more useful lumens.

Another issue is the drive current that is used with the LEDs. Early LEDs were designed to run with a drive current of 350mA as, broadly speaking, this achieved the peak of the linear relationship between current and lumen output. Above 350mA the efficiency of these early LEDs tailed off significantly (the droop characteristic).

However, modern LEDs are able to operate at much higher drive currents and the relationship between lumen output and drive current is almost linear above 350mA – without the droop. In fact, with some modern LEDs, only 23 per cent of the capacity is being used at 350mA. Which means that 77 per cent of the LED’s capacity remains unused. Running a modern LED at a low current is like racing Le-Mans 24 in a performance sports car at 5mph and never changing out of first gear: un-utilised potential.

Consequently, there are very good reasons to drive modern LEDs at higher currents (e.g. 1,000mA) to make use of the available capacity of the light source; efficiency and cost-effectiveness to name but two motivating factors.

However, driving LEDs at higher currents does result in higher heat generation, so it’s important to ensure specified luminaires incorporate good thermal management. This should include an efficient heat sink to maximise conduction of heat away from the LED chips, as well as effective airflows through the luminaire and use of surfaces and coatings that facilitate radiation of heat away from the luminaire.

It is also important to select luminaires that are easy to upgrade to newer LED sources as and when efficacy improves and ensure that you are purchasing from a reputable manufacturer (that will still be around in years to come to deliver that upgrade). There are significant benefits to dealing with a well-established manufacturer that has experience of the technical issues relating to exterior lighting as well as the specific criteria that govern LED performance. LED exterior lighting has to withstand a rigorous environment that is only fully understood by those companies with experience in designing luminaires for these applications. 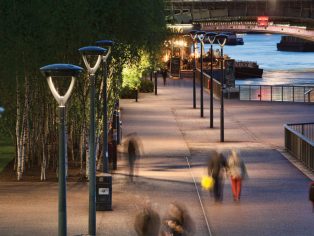