Sea Containers House – Office life… but not as we know it

Converting a landmark 1970s building into a central London HQ is one thing, but designing it to deliver radical new ways of working takes the challenge to a whole new level, as Ray Philpott dicovers.

Enjoying a prime location next to Blackfriars Bridge on London’s South Bank, Sea Containers House was originally designed in the 1970s as a luxury tourist hotel overlooking the Thames.

But the envisaged hotel never materialised. Facing a struggling UK economy, the owners decided to open it as an office block instead.

It was originally constructed as a massive, heavy, concrete and steel grid over 11 floors with only a single circulation core and low floor-to-ceiling heights across much of the structure. It is, perhaps, not an obvious choice for relocating a corporate headquarters with the intention of bringing constituent companies closer together.

But global marketing and advertising agency Ogilvy and Mather Group UK did exactly that after commissioning BDG architecture + design and architects Matheson Whiteley to reinvent the interior.

Having spent 20 years at Canary Wharf, in January the company moved into a ground breaking workplace set in the creative and cultural landscape that includes the Royal Festival Hall, National Theatre, British Film Institute and Tate Modern.

Abandoning the traditional office concept
BDG Matheson Whiteley partnership has created a building designed for today’s working life, moving completely away from the traditional ‘cellular’ office concept. The interior of the floors where the various companies are located have been opened out vertically and horizontally. On each level there’s a mixture of working spaces to the east and west sides of the building and centrally, shared public and circulation areas encourage interaction between the businesses and offer informal working.

Two newly created top floors contain exciting shared spaces including the Cucumber Terrace bistro, the Sunset Bar, staff canteen, 200-seat amphitheatre and rooftop terrace accommodating 140 people – all with superb views over the river and the capital. Although seamlessly linked together, these areas nevertheless retain a distinctive identity and character.

Artwork installations are located around the building and in certain areas the original concrete interior has been exposed as an attractive finished surface in its own right.

Ultimately, the overall impression the client and design teams have been striving for is to create something that feels more like a large, involving cultural space than an office environment for 2,700 people.

Initial brief
BDG Matheson Whiteley’s involvement in the project began in 2013 after winning the design competition held by Ogilvy and Mather. The partnership had capitalised on BDG architecture + design’s office design expertise and proven talent of Matheson Whiteley’s architects for creating public exhibition space, including work on the Tate Modern.

The client’s fundamental brief was to relocate to a creatively stimulating office space suitable for flexible working. One that would bring its 10 branded companies together in a single building, creating a critical mass while enabling each company to retain a sense of independence, brand and cultures.

Initially it was purely conceptual with no specified size or location but during the competition it was revealed that the new office would be at Sea Containers House, on a 21-year lease.

“All our concepts and thoughts now had to be applied to that building,” explains BDG architecture + design’s creative director Colin Macgadie.

“It’s a fascinating structure compared to the more modern buildings on the market at the time but presented a complex challenge, having been designed as a hotel around a dense structural grid and containing a variety of different environments”.

“Our evidence-based design showed how a diversity of environment with the right mix of scale and type of space would work, retaining brand identities while enabling greater intermixing between them. At the same time this approach offers flexibility should the organisation contract or expand.

“Using scientifically-based analysis and modelling, we proposed creating many different work and social spaces. Some for small groups or round-table sessions, others for more informal working like steps, booths, high-quality coffee areas on every floor and breakout areas. Some spaces would be for collaboration, others for more intensive solitary work, and there would be bookable and presentation spaces.

“These spaces, combined with the restaurant, bar, 100-seat canteen, grab-and-go facility and coffee shop – all functioning as informal work spaces outside lunchtimes – took 45 per cent of the space. Free moving circulation areas claimed 20 per cent and ultimately, only 38 per cent was allocated desk space.

“We knew this would be a massive cultural change, even for Ogilvy and Mather, but being a creative organisation, they embraced it,” says Macgadie.

Three distinct elements
Owner Archlane had earlier begun modernising and upgrading Sea Containers House to Category A fit-out standard. However, once BDG Matheson Whiteley got the green light, it asked Archlane to halt this activity and deliver the building as 50 per cent shell and core so it could progress its own architecture and designs without having to rip out already completed work.

The refurbishment involves part of the ground floor and all the remaining floors bar three, four and five. Three of BDG Matheson Whitley’s redesigned floors are used by global media agency MEC and the remainder of the building is occupied by luxury boutique hotel the Mondrian London.

Architecturally, the project consists of three distinct elements. A two storey-high ‘base’ (at levels one and two) that is opened out across a large floor plate. Both floors feature central, shared space with company work areas to the sides plus extra-height glazing offering excellent river views.

The second element, from level six upwards, is a stack of six floors.

“The central tower consists of very open, ‘non-branded’ shared spaces that connect with the various company ‘neighbourhoods’ located in the east and west towers. This makes it easy for people to see and interact with each other.”

While ventilation and heating systems are mostly mechanical, with much of the plant hidden under the roof terrace, the sophisticated building management system installed by engineers Arup, use of insulation and low-e glazing have earned Sea Containers House BREEAM Excellent status.

“When you arrive it does feel like you are in a cultural type of environment, where the architecture defines the spaces, rather than lightweight, gimmicky features,” he says.

Vertical circulation was a big challenge and, in response, the team decided to remove substantial parts of the interior and cut out 12 new openings with staircases.

“We looked at classic examples in the Royal Festival Hall and National Theatre where large staircases have over-sized space around them, forming landmarks that are more than just about getting somewhere. Ours not only improve circulation, but the large ones set against the river view windows physically open up the surrounding ceilings and areas on each floor, bringing in extra light and creating a greater sense of space and scale.”

These have bigger, deeper treads to create a slower pace of circulation and can be places for people to sit, spend time or meet. Elsewhere, smaller more domestic-style stairs provide faster-moving, practical links between the  various floors.

Staircases feature fine wire mesh balustrades which, the architects’ own trials have shown, create openness as they are actually less visible over distances than reflective glass panels.

“Vast amounts of concrete were used in the original dense grid structure in a way that could never happen now. Where practical we’ve left this heritage material exposed, again echoing the exhibition space idea.”

The amphitheatre at the top of the building is a major focal point, too, providing a place for “town hall gatherings,” a facility the client did not have before.

“Essentially, it’s a very large staircase between the top two floors with a view over the Thames,” explains Matheson.

“You can use it to access the canteen and people can sit on it to eat if they want but it also has to work as a proper performance space, for pitches, open meetings or client presentations. Given its function, locating it among the other social spaces seems appropriate.”

Four covered balconies can be found on the upper levels, one of which runs along the the length of floor 12, offering yet more choice of social space.

Rewarding
The Sea Containers House project, largely completed last autumn, has won admirers and has been shortlisted for the 2016 New London Architecture Award for office interiors, due to be announced on 7 July.

While that’s a laudable achievement, both Macgadie and Matheson say the most rewarding aspect has been the client’s responsive, progressive approach.

“They really embraced the science and a new, flexible way of working to create a best in class environment that’s really suitable for their business. Irrespective of the architecture, that’s definitely the best thing about the project.” 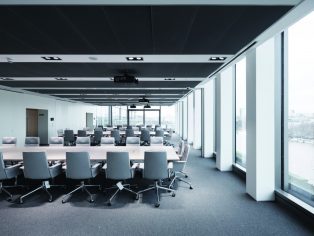