A new sci-fi-inspired Met Office base in Devon is set to become an architectural landmark as well as a top destination for environmental scientists exploring how our climate works. Stephen Cousins reports from the scene.

Devon’s reputation for cider and cream tea could take a more futuristic turn when the £20m Met Office supercomputer complex near Exeter is completed next year. The cutting-edge 30,000 ft2 facility in Exeter Science Park will feature a huge IT hall where a £97m supercomputer weighing 140 tonnes will perform 16,000 trillion calculations per second, as part of efforts to better understand the workings of our climate.

Next door to the IT hall, leading international scientists will gather in the two-storey Collaboration building, a hexagon-shaped construction inspired by circuit board patterns and lit by turquoise neon lights. Its unique form is intended to become a new icon for the region, located on a ridge clearly visible from the southbound stretch of the M5 motorway, a key gateway into the city.

The Collaboration building presented several challenges for lead designer Stride Treglown and design and build contractor Willmott Dixon. The envelope includes a range of treatments, including a Euroclad built-up roofing system, zinc roof projections and wood soffits, plus weather louvres and timber fin brise soleil. In addition, the raking form of the hexagon introduced structural eccentricities into the frame, requiring extra support to prevent the building from toppling over.

The Met Office complex forms part of a major phase two development at Exeter Science Park, which is striving to become a world-leading centre of predictive environmental science.

When it becomes fully operational in 2017, the project will expand capacity within the Met Office’s high performance computing programme. Opportunities created by the facility are anticipated to bring £2bn to the UK economy.

The supercomputer will be 13 times more powerful than the current system used by the Met Office and able to run more sophisticated weather and climate models to increase the UK’s  resistance to extreme weather events.

The Met Office appointed Atkins and partner Faithful + Gould as concept architects to take the project through to RIBA Plan of Works Stage 3, including architecture, civil and structural engineering and mechanical and electrical engineering design. Main contractor Willmott Dixon was then appointed, under the Scape Group’s National Major Works framework, to complete construction working alongside architects Stride Treglown, structural engineer WSP and services engineer Arup. Atkins has remained involved in the project as technical advisor to the Met Office.

Human interaction with computers was a key inspiration in the concept design for both buildings, explains James Harrison, design director for the South West and Wales at Atkins. He explains:

“Progressing through the design, we determined there were two separate environments to be created: firstly a large box containing the computer, which, similarly to a plant room, doesn’t need natural light and houses mostly static functions, plus related maintenance and servicing facilities. In contrast, the Collaboration building needed to be very flexible in use, with natural light, open spaces, and the freedom to express itself.”

The geometry of both buildings references films themed on computers. The long, single storey computer building resembles the black monolith in Stanley Kubrick’s 1968 sci-fi classic 2001: A Space Odyssey, in which the psychotic computer HAL attempts to kill the crew onboard a space station.

The facade is clad with Kingspan Benchmark Evolution composite insulated cladding panels and the roof with Kingspan KS100 LP low profile composite insulated cladding panels. The building’s north gable will feature aluminium louvres to increase shading and the south elevation will feature a living wall of plants formed in the logo of the Met Office.

The hexagonal form of the Collaboration building was heavily influenced by the 1982 film Tron, which portrays a computer-generated world inhabited by humans. The futuristic setting features neon-lit backdrops and costumes and the motif of the turquoise blue hexagon.

“In popular culture, hexagons are often used to symbolise technology, from the control panel inside Dr Who’s Tardis to Hexbugs, the latest craze of hi-tech children’s toys,” says Harrison. “In addition, the form represents the chemical make-up of carbon, an important element in climate research.”

The shape satisfied the client’s brief to create an instantly recognisable landmark that would reflect the pioneering work undertaken by the Met Office, as well as put Exeter Science Park on the map.

Flexibility in use is key to the building, as it will host visitors from across the globe, working on a disparate range of projects that could last anything from two days to three months. The layout also reflects Exeter Science Park’s design code, which aims to encourage different departments to interact, potentially sparking new ideas and innovations.

The steel framed structure was very challenging to build due to the fact that it slopes in a north-south orientation and the triangle shapes forming the sides of the hexagon increase loads on the east and west extremities.

The structure is formed of raking columns, bolted together using stiff connections and built around an internal box structure to resist eccentric forces.

“The building is trying to collapse in on itself as well as pull itself over; to deal with this we installed some very substantial foundations and large internal columns. A large diaphragm slab linked into the lift shaft on the first floor and a diaphragm slab on the roof give the structure extra rigidity.”

The project is BIM 2-enabled, which enhanced design coordination and clash detection and allowed the design team to coordinate and fix errors before the project reached site. WSP’s BIM model was passed directly to the steelwork fabricators to enable swift analysis of the superstructure and speed up production.

A key design challenge was interfacing the many different cladding conditions. The main roof and wall sections are formed out of a Euroclad built up roofing system with raised seam outer sheets and a painted finish of PVF2.

The Collaboration building is designed to BREEAM Excellent standard and features extensive biodiverse landscaping and a natural ventilation strategy. The curtain walls on the north and south elevations use a Comar 6EFT SSG structural glazing system that includes attenuated weather louvres and timber fin brise soleil. The latter not only form part of the natural ventilation but also visually reference the intricate layout of computer circuitry.

‘Feature roof’ projections to the sloping north and south elevations, extending beyond the curtain walling, are clad with VMZinc. The soffits of the projections are clad with Thermowood tongue and groove boarding.

“The projecting fascia soffits become inverted on the lower part of the building, effectively transforming into a roof condition. As such, the junctions between walls, roofs and soffits had to be developed so they are capable of performing in a variety of orientations.”

The cladding sub-contractor developed its BIM model in Google Sketch-up, which was imported into Autodesk Revit to develop the detail and link in 2D construction drawings to ensure accuracy of information.

The sloping south elevation severely limited the choice of louvres that could remain weather-proof in that condition, but following extensive research the team identified a product, manufactured by the C/S Group, that had been tested and was certified to work on an incline.

The use of louvres, instead of openable windows, was dictated in part by the high level of traffic noise on site, of up to 75 dB, generated by the nearby M5 motorway. Noise was reduced by positioning the building behind the solid mass of the IT hall to create a sound buffer, and by specifying glazing with high noise attenuation.

The Met Office’s expertise in weather forecasting has come in handy during construction, as Willmott Dixon had free access to a detailed forecast coordinated with its construction programme to highlight any risks, such as the potential impact of rain on concrete pours or soil excavation.

“Fortunately, it being a Met Office job, so far we have been blessed with brilliant weather, particularly at the start of work when we moved around 11,000 m3 of soil with no concerns,” says Cartwright.

Needless to say, when the supercomputer goes live next year, the Met Office’s improved forecasts should benefit construction projects across the UK for many years to come. 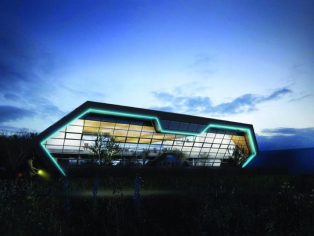 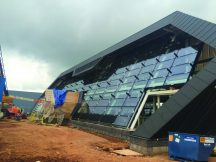