A particularly attractive feature is the frameless glass-to-glass corner option that eliminates the need for an intrusive corner profile by transferring the glass load directly onto the adjacent mullions. The result is wider unobstructed views from the inside and a sleek contemporary look from the outside.

The FWS 35 PD facade is offered with a choice of two levels of insulation – .HI (highly insulated) or .SI (super-insulated) – the latter being officially certified by the Passive House Institute with a Ucw value of 0.79 W/m2K. It can accommodate double- and triple-glazed units from 22 mm to 50 mm in thickness, with weights up to 250 kg per transom.

The versatility of the system is further enhanced by a heavy-duty version that can carry up to 400 kg and the inclusion of a single glazed option that is perfect for use in high-end display windows and internal applications.

Importantly, where ventilation is required, the Schueco FWS 35 PD facade can incorporate Schueco AWS 114 opening window units; operated either manually or mechatronically with a concealed Schueco TipTronic actuator, these are an attractive and practical method of ventilation and can be specified with either top-hung or parallel-opening types.

A further option is to insert Schueco’s new concept window, the AWS 75 PD.SI turn-tilt window, into the facade. This advanced, ultra-slim system is expected to become generally available in the UK later this year.

Despite the slimness of its profiles, the Schueco FWS 35 PD facade can be fitted with a variety of solar shading and may be specified with three levels of security – standard or resistance classes 2 and 3 of EN 1627, the latter incorporating P4A and P6B security glass. Because the components that help to achieve this are fully concealed, the appearance of the facade is unaffected. 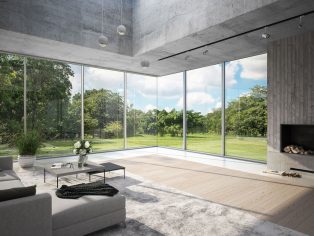