The importance of visual aesthetics to architects is demonstrated by the popularity of the FWS 60 CV concealed vent facade from Schueco UK. The unique feature of this state-of-the-art aluminium system for floor-to-ceiling ribbon windows is that from the outside it is impossible to see which vents open and which vents are fixed.

This innovative design first, which also has the benefit of maximising light transmission through the facade, is achieved by merging the vent with the load-bearing structure. Even from inside, the only indications of an opening unit are a flat slimline shadow gap and the presence of the window handle.

Moreover, to ensure safety in use, an almost invisible all-glass Juliet balcony can be integrated into the areas which have opening vents.

Also ideal for punched openings, the Schueco FWS 60 CV facade counteracts the prevailing trend of meeting the demand for ever greater levels of thermal and sound insulation by using ever larger window profiles.

Instead, the system has been designed with face-widths that are elegant and narrow and yet its inbuilt engineering excellence means that it delivers impressive Ucw values as low as 0.85 W/m2K (with a glazing U value of 0.7 W/m2K) as well as an extremely high level of functionality.

In addition, the FWS 60 CV system be specified with automatic ventilation control using mechatronic controls to open and close the vents. Interestingly, in 2017, this particular system won the German Design Award for the successful merging of aesthetics and technology.

A high-performance external, centre and internal gasket system enables the Schueco FWS 60 CV to satisfy stringent wind-load and weather-tightness requirements, while a side-hung or turn/tilt opening vent option and a choice of two basic depths give the facade useful design flexibility.

With burglar resistance up to RC 2, the Schueco FWS 60 CV facade is the ideal system for enhancing the thermal performance and visual appearance of new-builds and existing commercial properties.

For further details of the Schueco FWS 60 CV concealed vent facade system, please e-mail mkinfobox(Replace this parenthesis with the @ sign)schueco.com. 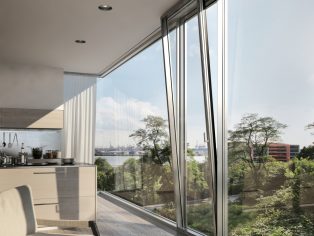