English Cities Fund, the joint venture between Muse Developments, Legal & General and the Homes & Communities Agency, has received planning approval from Salford City Council for One New Bailey, a 125,000 sq ft, eight-storey office development on the banks of the River Irwell, in Salford.

One New Bailey was designed by RHWL Architects, which is advising as both masterplanner and lead designer for the building. Planning consent for the development, funded by Legal & General, marks a key milestone in the New Bailey development, where a 143-bed Premier Inn and a 615-space multi-storey car park are already progressing on site.

Demolition of the existing buildings will begin next week, clearing the way for the development of the scheme, which is due for completion in autumn 2016.

RHWL was appointed by English Cities Fund in July 2007 to undertake a series of detailed design studies for the Salford Central Masterplan sites, using the Urban Initiatives development framework as the starting point. In July 2013 RHWL Architects was appointed lead designer for the first commercial office building on the New Bailey plot.

“The One New Bailey development will have a significant impact on the area and we are delighted that planning has been granted for its progression. The masterplan aims to deliver Connectivity and a Sense of Place that in turn, will link the major regeneration components of Central Salford. New Bailey will create a new destination and heart to Salford’s success story and emerging urban design initiatives. This development is about so much more than a single building.”

One New Bailey will provide large floorplates of up to 17,212 sq ft and will be developed to BREEAM ‘excellent’ standard. There will be leisure units on the ground floor and a new public square, extensive landscaping and an outdoor events space, which can be accessed by the existing pedestrian bridge from Spinningfields. 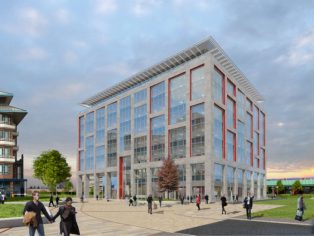