Royal Shakespeare Company appoints BAM for “The Other Place”

Birmingham-based BAM Construction is to carry out a major refurbishment of a Royal Shakespeare Company (RSC) theatre in Stratford-upon-Avon.

The contractor, which was behind the recent overhaul of the National Indoor Arena (now the Barclaycard Arena) in Birmingham, will deliver the transformation of the RSC’s iconic studio theatre, The Other Place.

BAM will remodel the internal space of the temporary Courtyard Theatre, the original site of the 1974 The Other Place, to create a festival venue for RSC productions and a creative hub, which will house rehearsals, research and development, and training for artists throughout the year. Local amateur groups will be able to use the theatre for rehearsals and performances, and The Other Place will also be available for commercial hires, raising valuable income to support the RSC’s artistic programme. As part of the project there will also be a new storage facility to house the 30,000 costumes from the RSC’s Costume Store, making them available for public viewing for the first time, via theatre tours.

The scheme is part of a wider Transformation Project that saw the Royal Shakespeare and Swan Theatres re-open in November 2010.

“BAM were selected from our tender list as they were by far the most economically attractive, for their structured approach, their good systems management, their understanding of local issues and a good balanced team. We are very much looking forward to working with them on The Other Place project.”

BAM is starting on site this month, with completion this autumn ahead of events in 2016 to mark the 400th anniversary of Shakespeare’s death.

The contractor has its regional headquarters at self-designed and built FORE business park in Solihull.

“BAM is delighted to be working on this prestigious facility at the heart of Shakespeare’s historic home town.

“We will work hard to ensure the project benefits the local community at construction stage as well as in end use. 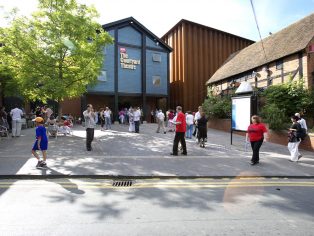 RSC The Other Place