The Quest, a discreet, accessible single-story home in Dorset and Newhouse of Auchengree, a zinc-clad contemporary farmhouse in North Ayrshire, have been shortlisted for the 2017 RIBA House of the Year award.

The homes in the running for the UK’s most prestigious award for new houses are being revealed in a four-part Channel 4 TV series: Grand Designs: House of the Year. The Quest and Newhouse of Auchengree were revealed in Episode Three, which was broadcast this evening (Tuesday 21 November 2017).

The latest two projects shortlisted for the 2017 RIBA House of the Year are:

They join the following four houses on the shortlist, with another one yet to be announced:

The final house to make the shortlist and the winner of the 2017 RIBA House of the Year will be announced on screen during the final episode of Grand Designs: House of the Year (to be broadcast on Tuesday 28 November).

The 2017 RIBA House of the Year is sponsored by Paint & Paper Library. 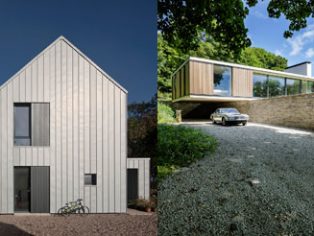 Newhouse of Auchengree © David Barbour and The Quest © Martin Gardner