“I’m actually a graduate of DMU and have stayed in touch with my course tutors as my career has progressed. We’d talked for a while about becoming involved with the course as its important for the students to understand the opportunities in the industry and hear examples from the working world.”

“The mentoring Amit and I are undertaking involves one-to-one sessions with the students on a weekly basis. We review their work, help identify next steps and ensure they’re following the brief. We’ll be supporting them through until March next year so will see the module from start to finish.”

The module Tahir is mentoring sees the students tasked with creating the design for a car showroom and includes undertaking precedent studies, providing drawings, photographs, floor plans and renderings as well as explaining the rationale behind the design.

“We’re delighted to have Amit and Tahir as part of the teaching team for the BSc Architectural Technology programme. They have brought their wealth of experience in practice to the course and we’ve already started receiving positive feedback from the students.”

“For instance, upon learning Tahir was an alumnus, one of the students was so delighted and remarked ‘we now have a role model to look up to’ whilst another student commented that ‘Amit talks with the authority and confidence of a practicing professional and he instils this same confidence in us’. In addition, the students were both inspired and grateful for the opportunity to visit rg+p’s office in Leicester. We hope this will be the beginning of long-term relationship between DMU and rg+p.”

Alongside the fortnightly mentoring sessions, Amit and Tahir have also given a talk to all year groups about their role at rg+p, and invited final year students to tour the practice’s Leicester office to meet other qualified architectural technologists and architects.

“We’re keen to support and inspire the next generation of architectural technologists and it’s collaboration with local universities that enables this. It also enables us to identify potential new recruits and help establish careers, which is good news all round!” 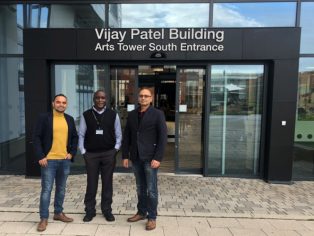