The winners of the annual Construction Development Alliance (CDA) Awards were revealed recently at Burnley Mechanics Theatre, during a ceremony hosted by television personality Dominic Littlewood.

Developed to support the future of the property and construction industry in the North West, the awards, sponsored by Sika Sarnafil, recognise the hard work, determination and growth of young people in the sector.

Commenting on his win, Bobby said:

“It was very proud moment to receive the awards on the back of a challenging job on Beacon Barracks. It has taught me how great it is to thank people for their hard work, something that I now do regularly during my day.

“The awards demonstrate that there are viable and progressive career opportunities available within the sector, something I’m really passionate about.”

The remaining category winners are as follows:

“It’s so important that we celebrate the exceptional young talent within the North West. We received triple the amount of nominations compared to last year from all sections of society, from colleges and industry and the standard of entry was extremely high, so we want to congratulate all of the winners and nominees.”

As part of the awards event attendees raised over £2,500 for a local Blackburn YMCA housing project, a charity close to the CDA’s heart as it supports the personal growth and development of vulnerable young people. 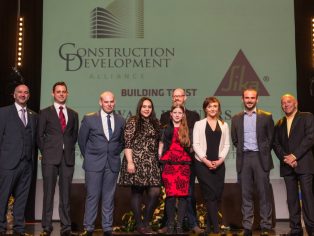