Retirement village plans in literary town are re-cast in CLT

In just one year from construction starting it will offer a new model of retirement living in the birthplace of ‘Mr Toad, Mole and Ratty’ – but the ambitious timescales for PegasusLife’s site in Falmouth demanded an innovative solution from structural engineers Symmetrys.

Its latest project is typically ambitious. Construction in the harbour tourism town on Cornwall’s south coast, where hotel guest Kenneth Grahame created ‘The Wind in the Willows’ in a letter to his son, is set to start in early 2017 and last just 12-months.

The timings added to the challenge for London-based structural engineering consultancy Symmetrys, tasked with developing the most economic sub-structure and superstructure solution. Designs would need to complement the architect’s aspirations for layouts and aesthetics and maintain the client’s commitment to the highest building standards, fast.

That meant traditional methods, often considered the obvious or default solution for this type of large residential project, raised concerns. While a steel frame is familiar for contractors and allows large spans, sound proofing can be challenging. A crane is needed, as are additional fire protection and walls. This method also involves a high level of site activity in a sensitive local environment.

A precast concrete twin wall construction with precast floors reduces local impact of site works, can achieve large spans without internal supports, has good sound resistance and is resistant to corrosive environments. Yet because it is so heavy, the method has a significant impact on foundation costs. Moreover, because of the shape of the structure, Symmetrys knew it would only be possible to precast up to the fifth floor. The roof would need to be formed in steel.

“Traditional methods are great for the right project, but building in concrete or steel is a relatively slow process; it simply wouldn’t work with the deadline,” says Ashwin ‘Ash’ Halaria, Associate at Symmetrys. “There were other considerations and complications too. It all led us to exploring more modern, pre-fabricated methods.”

Symmetrys immediately set about analysing all the possible structural frame options – and was ultimately led to a relative new-born. The shortlist included light gauge steel (LGS) and cross laminated timber (CLT). Because both can be fabricated in the workshop and put up quickly onsite, they also allow earlier starts of follow-on trades and reduce the local impact of site works – a key consideration in a picture postcard town.

On the face of it, a light gauge steel frame was the least expensive. Because it’s light, it would also bring savings on the transfer structures and substructure – not to mention that most partitions and inner leaf is already installed within the main frame programme.

Yet the walls would provide less acoustic insulation than blockwork and the partitions – all of which would require vertical alignment – would be less robust. Everything considered, it was not deemed a viable option for the client and architect’s vision.

The more sustainable CLT offered obvious benefits. On top of a saving on transfer structures and substructure due to being lighter than traditional methods, with most party walls installed within the programme for main frame, the partitions are also robust.

However, the method is not without issues. Early, finalised services distribution layouts through walls are essential and late modifications require further design checks to incorporate. The most prohibitive factor in the technology’s take-up to-date has of course been its higher cost – but Symmetrys presented a more holistic analysis to the client.

Yet the now discounted LGS would have added more than £200,000 to the build cost in additional fire- and sound-proofing, while foundation costs would be 12 per cent higher. A precast concrete structure would need an extra £100,000 for foundations and screed. A steel frame, with precast concrete floors, would have needed over £90,000 more spent on foundations and party walls, bringing the difference in cost closer to 10 per cent.

“The bare costs of CLT can be more than 20 per cent higher than traditional concrete or steel frames, but you need to look at the technology in a different way,” Halaria says. “The walls come with it, unlike with a steel frame. You can save on the foundations. Even the installation of M+E is quicker as you can screw straight into the CLT. The full construction programme can be four to five weeks shorter. And then there’s the environmental-saving, too.”

Symmetrys worked with a CLT supplier on the design and will remain heavily involved in the project. The firm, which prides itself on its knowledge of constantly evolving construction materials, hopes the solution could become more prevalent.

“There’s never just one solution to any structural challenge,” says Halaria. “That’s why we like to be a collaborative partner and always provide our clients with the right range of options – to help them make the right, informed choice. What was refreshing in this case was the forward thinking attitude of the client, which made this method possible.”

“The obvious solution would have been to design a concrete superstructure, but after assessing the structural frame options it became quite apparent to use Cross Laminated Timber,” Halaria concludes. “By being honest and open we helped to reduce the construction programme which in turn reduced costs and we helped exceed the client and architects’ aesthetic brief.”

On completion in 2018, the development will offer 34 apartments for the over 55s.

It will be the latest in PegasusLife’s portfolio, all in coastal areas or popular towns and cities. Service charges will be spent on improving residents’ living experience, reflecting a mission to re-think retirement housing in the UK. 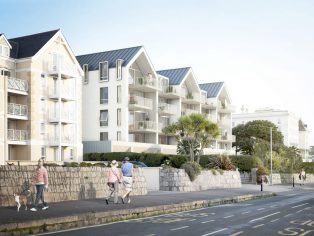