After two specialist pilot training schemes proved to be a huge success, Redrow Homes is now recruiting more would be designers and surveyors to embark on apprenticeships.

A dozen trainees, all aged between 16 and 21, were initially recruited into the commercial departments as part of an in-house Redrow training scheme set up with Coleg Cambria, based in North East Wales, and the Chartered Surveyors Trust. Students have since been working towards an NVQ in surveying while gaining ‘on the job’ experience.

In addition, seven new recruits with a passion for design and engineering were taken on to work in Redrow’s technical departments. Their apprenticeship course was also developed with Coleg Cambria, with students embarking on a BTEC Level 3 in Construction and the Built Environment and an NVQ Level 3 in Civil Engineering or Architectural Design.

Redrow has now launched a nationwide recruitment drive for a second intake of trainees under both programmes to start in August.

Commercial apprentice Ed Thomson, 22, from Cannock, is based at Redrow Homes (Midlands) divisional headquarters in Tamworth, Staffordshire and joined the apprenticeship programme after studying for A-levels in law and psychology. He said:

“I’ve always wanted to work in the construction industry. I had applied for many apprentice roles after leaving school but to no avail. I didn’t want to opt for a trade, I was more interested in understanding how building projects came together.

“The structure of the commercial apprenticeship involves working full time within Redrow’s commercial department with six ‘block’ weeks of training for the BTEC, covering the various elements such as maths, measurement, tendering etc. For the NVQ element, it’s all about gathering evidence of a range of expertise over a two-year period.

“Alongside that I’ve been working with Redrow’s quantity surveyors, assisting with tendering, arranging payments and undertaking valuations and negotiations with suppliers. It’s certainly challenging as there is lots of information to absorb on a daily basis!

“I’d recommend the apprenticeship programme to anyone as it’s helped me to gain qualifications and knowledge while still getting paid. A good quality apprenticeship is worth every second. My next step is to go to university and hopefully become a fully qualified QS.”

“I’d always been interested in architecture. I’d done A-Levels and saw the apprenticeship with Redrow as an alternative route into the industry rather than attending college or university. I knew it would give me the qualifications as well as the experience of learning on the job over two years, which was a fantastic opportunity.

“The course has been really good and provided a strong foundation for my career. It has proved to be a worthwhile choice as I have been told I’ll be promoted to the role of trainee architectural technician when I complete my apprenticeship in November. It really shows that hard work can pay off in a short space of time. I’ll also be starting a HNC in September as a trainee architectural technician.”

“Our commercial and technical apprenticeship programmes are enabling us to attract young talent into our ranks so they can embark on specialist career paths. The courses we’ve developed in conjunction with professional training bodies result in real qualifications for our trainees that provide a superb grounding for eventual progression into management roles.”

Redrow’s deadline for technical and commercial apprentice applications is the end of July. 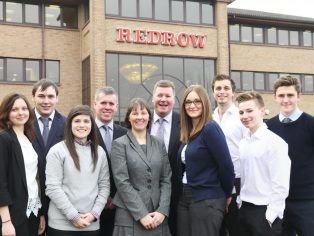