Redrow’s joy as it outperforms top companies for employee satisfaction

As a housebuilder that prides itself on its people, Redrow is shouting the results of its latest survey results from the rooftops after it outpaced some of the UK’s top businesses for employee satisfaction.

Redrow asked its staff members for feedback on everything from their general perceptions of the company to their thoughts on career prospects and customer service. The results were so high, that they were benchmarked against norms for the ‘top companies’ (i.e. the top 25% of highest scoring organisations) in Employee Feedback Ltd’s database.

The questionnaire revealed a massive 95 per cent of respondents rate it as a good employer, while 94 per cent say they’re proud to work for the company and an overwhelming 98% think that the firm has a good future.

“We’ve enjoyed a strong run of financial results of late and our rapid expansion has coincided with us increasing our workforce by 138 per cent since 2009 to a record 1,550 employees.

“At a time of accelerated growth we didn’t want to lose focus on our employees, which can often happen when a workforce is expanding quickly and new staff members are bedding in, so we asked for feedback on what it’s like to work for us and listened to them about where improvements can be made.”

“At our heart we are a company that is very focussed on our people, which is underpinned by our company strapline ‘Our pride ~ Your joy’,” Karen added. “Many of our employees have been with us for decades and we often have members of the same family following in their parents’ or even their grandparents’ footsteps to join us.”

Despite the influx of new personnel and increased job opportunities elsewhere in the market, staff turnover at Redrow has remained consistent for the last three years and at half pre-recession levels. Not only that, 97 per cent of participants said they enjoy the work they do for Redrow and 91 per cent said they would like to be working for the company in a year’s time.

The survey was sent to all employees and the results are taken from the 858 responses received.

Participants were asked about their views on personal development and 83 per cent said they can see good career opportunities ahead (top company norm = 60%) and the same number believe Redrow ensures they receive the training they need.

As Redrow continues to strive for excellence in customer service it also delved into staff attitudes in this area finding some 83 per cent of respondents believe Redrow provides all the assistance they need to deliver a great service (top company norm = 79 per cent) and 94 per cent take pride in the work they do (top company norm = 85 per cent).

As well as benchmarking against other companies, Redrow was able to compare the results to those of a smaller staff survey in 2013 and was pleased to find it had made improvements in many areas, including the number of people who believe Redrow really cares about its employees, which had increased from 83 per cent to 88 per cent.

“We were extremely satisfied with the results of our employee survey and will be utilising the results to make improvements in some areas. It’s our belief that employee engagement has a direct correlation with the company’s overall performance and productivity levels so we will be asking our staff for regular feedback.

“We’re confident that with a highly engaged workforce and staff who feel valued for the role they play, we will secure Redrow’s success for many more years.”

“We have seldom seen such a positive set of engagement survey results as these. While it’s not uncommon for much smaller companies to have highly engaged employees, it’s very rare for a large, widely distributed business like Redrow to have such an enthusiastic, committed workforce.

“These findings are truly exceptional, and place the company with the best of the best of the organisations we work with. There’s little doubt from the evidence of this survey that Redrow really does care about its people.  It’s also an outstanding example of how employee engagement is not just a ‘nice to have’ – it really has a big impact on the bottom line.

“It’s been a privilege to work with a company as enlightened as Redrow.”

For the six months to 31 December 2014, Redrow delivered record half year financial results with Group revenue rising 54% and number of homes built increasing by 18 per cent.

* Reference: Engage for Success “The Evidence” 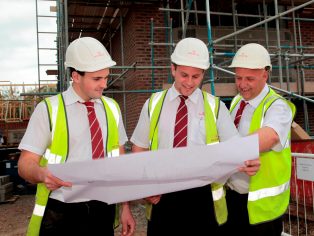