Redrow to recruit 40 apprentices in its 40th year

Redrow Homes will be taking on 40 more apprentices this year – one for every year of the company’s history.

The recruitment drive will be launched at the start of National Apprenticeship Week (March 3-7) and just a few months before Redrow celebrates its 40th anniversary in November.

The housebuilder already ranks in the top 100 apprentice employers in England and was named in the 2013 Building Good Employer Guide. As the British Chamber of Commerce calls for a Government-led scheme to encourage employers to take on more apprentices, Redrow is already leading the way. The new recruits will bring the company’s total number of apprentices to 80+.

“Apprentices are the lifeblood of our industry and essential to ensure a skilled workforce for the future. As the economy continues on its path to recovery, it’s vital that we continue to invest in young people and provide them with the skills they need to forge a successful career in construction.”

Having reached a record high in 2012, youth unemployment levels are now falling but there are still almost 920,000 young unemployed people in the UK.

Redrow’s offers both trade and office-based apprenticeship schemes across its building sites, head office and 10 divisional headquarters in England and Wales. Each initiative combines paid ‘on the job’ training, with the opportunity to gain a recognised qualification. Last year the company was highly commended as an employer of apprentices by the National Apprenticeship Service and secured a place in the Top 100 Apprentice Employers in England.

During National Apprenticeship Week, Redrow will be kick-starting its recruitment drive by visiting schools and colleges across England and Wales to talk to students about its training scheme.

“As Redrow celebrates its 40th anniversary this year, we are forging on with our ambitious growth plans. With apprentices, graduates and other trainees now making up 14% of our total workforce, young people are very much at the heart of our business and we will continue to invest heavily in staff training and development.

“It’s testament to that philosophy that many of our previous trainees are now in senior roles within the business – several of them as company directors.”

Completed over three years, the trade apprenticeship programme combines on-site work experience, in either bricklaying, carpentry and joinery or plumbing, with attendance at college one day per week to gain an NVQ. Apprentices are placed with an experienced sub-contractor, while they learn the skills required to do their chosen profession.

Applicants must be registered with the CITB, the construction industry’s training board, which can be done at: www.bconstructive.co.uk. Candidates are asked to take and pass the CITB Structured Learning Exercise in order to be considered for an apprenticeship. Shortlisted candidates will then be interviewed with the successful applicants commencing their trade apprenticeship in August 2014.

Candidates are recruited initially on a one-year contract to complete an NVQ Level 2 in business administration via observation, written work and monthly visits from a qualified assessor. If successful, this may be extended to two years to complete a Level 3 and could lead to permanent role.

You can find out more and apply for Redrow’s apprentice scheme at: www.redrowcareers.co.uk. 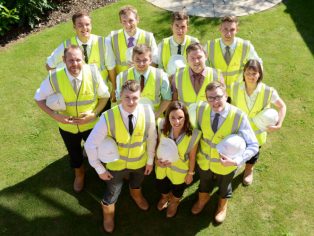