Leading UK housebuilder Redrow has taken on a record number of university graduates in 2015.

The Flintshire based company recently reported another set of record annual results and, to help meet high demand for its homes, is investing heavily in the next generation of workers.

Having already taken on 23 university leavers this year, Redrow is set to welcome a further eight new sales graduates in October.

This year the housebuilder is celebrating the fourth anniversary of its rotational graduate scheme. Re-launched in 2011, the popular programme grants successful applicants the chance to work across a number of departments – including its land acquisition, planning, commercial, sales and construction operations.

Last year Redrow also launched a new programme for those interested in HR, finance and IT roles.

A proven springboard for a long-term career in the housing industry, Redrow’s various graduate schemes have seen the company take on 71 graduate trainees over the last five years. Testament to its success, 32 of the 40 graduates that joined in previous years are still working within the business, having achieved promotions upon completion of the programme.

One graduate who made the leap from trainee to manager is Philippa Attwood, based at Redrow’s West Country division in Exeter. Philippa graduated from Cardiff University with a degree in City and Regional Planning before being recruited by Redrow on its graduate training programme in 2011.

In January 2013, on completion of the programme, Philippa was promoted to land manager at Redrow’s South West divisional office in Bristol, and has since changed direction to become area sales manager in Exeter.

“What really appealed to me about the Redrow graduate programme was the fact that it offered me a chance to work across a number of different roles and that it allowed me to get stuck in. I wasn’t just shadowing, I was going out and working as a sales consultant or an assistant site manager, and actually seeing how the role was done. The experience I gained was invaluable and I could not recommend the programme highly enough to young people interested in the housing industry.”

Annually Redrow builds more than 4,000 new homes across England and Wales, with an emphasis on traditional family housing.

Recognised as one of the housing industry’s best employers, the company has its own purpose-built national training centre in Staffordshire.

The developer directly employs around 1,650 people and provides employment for thousands of sub-contractors on its housing sites. 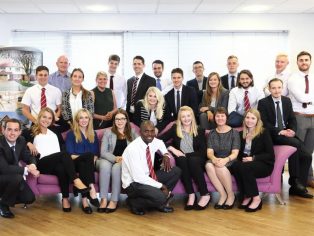