Having just celebrated its 40th anniversary in November, Redrow was named “the best of the big guns” when it scooped the gold award for ‘best large housebuilder’ at the WhatHouse? Awards 2014. The company also won the silver award for ‘best exterior design’ for its Kingston Riverside, development .

Having been founded in North Wales as a small civil engineering business by chairman Steve Morgan in 1974, Redrow now builds over 3,500 homes each year on more than 100 sites across England and Wales. The company posted record financial results earlier this year.

Beating Barratt in second place, and The Berkeley Group in third, the WhatHouse? Awards judges said:

“Redrow does sleek and modern, as well as its ever popular Heritage Collection. Redrow continues to set the benchmark for bold, refreshing marketing both on and offline, including the ‘My Redrow’ digital tool for customers, as well as its TV channel. Redrow also has an industry-leading focus on recruitment and apprenticeships, bringing through the next generation of builders.

“The Redrow culture starts at the top, but permeates through every employee, with a commitment to excellence across the disciplines. Redrow is perhaps best known for its work in the north-west, but it is quickly burnishing its reputation in the south, with Redrow London alone having quickly amassed a development portfolio with an estimated GDV of £2bn.”

“These awards are always very special and to win best large housebuilder in our 40th anniversary year makes it all the more memorable. We strive to be the very best in all areas of our business. Far from resting on our laurels after four decades, we want to go from strength to strength and be the homebuilder of choice for our customers, provide industry-leading training to our employees, and excel in customer service. This award is further proof we’re on the right track.” 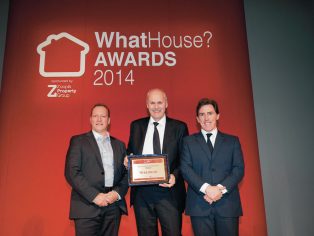