Buckley children can now walk safely to their after school club, thanks to a new pathway built by housebuilder Redrow.

Drury Primary’s after school group, The Beech Tree Club, provides a vital service to local families but children were having to walk from the school through the potentially dangerous staff car park to get there.

Keen to utilise Redrow’s expertise and resources, headteacher Mark Biltcliffe approached the company, which is building homes close to the school, to see if they could help make the approach much safer for the children.

“Although the children were being supervised when they went to and from the club, it wasn’t ideal that they had to go through the staff car park when cars were moving around, and as we head towards winter and darker days, it would have got even more concerning.”

So, over the school holidays a Redrow team stepped it to create a new 50 metre path, a gate and a fence. What’s more the work, which could have cost the school several thousand pounds if they had had to do it themselves, was all finished in time for the new term.

“Redrow kindly agreed to construct this for us at their expense and we’re extremely grateful. They’ve contributed something very positive to the community and have helped to keep our children safe. The Beech Tree Club is non-profit making and this has avoided trying to find a large sum of money from limited resources.”

Stephen Walsh, construction director for Redrow (NW), added: “Redrow is keen to get involved in the communities in which we build and Drury Primary School is right on the doorstep of our Heathlands and Abode developments. When we were approached about this, we saw that we could really make a difference to families locally so we were particularly keen to get involved. We hope all the children are now enjoying their much safer route to The Beech Tree Club.”

Redrow is also hard at work on its Abode and Heathlands developments off Drury Lane. For more information about the range of homes available in Buckley go to www.redrow.co.uk/abode or visit the marketing suite off Drury Lane which is open daily Tuesday to Sunday 10am to 5.30pm and on Mondays 11am to 5.30pm. 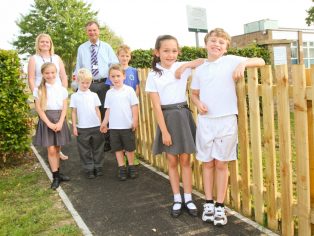