The judges praised Network Rail and Mace for creating a new, innovative station with its stunning triple-height atrium, the size of a football pitch, which floods the new concourse with natural light.

They also paid tribute to the atrium ‘bubble’ roof made from ETFE, which forms the centerpiece of the project. The new roof has transformed the once dark station into a light-filled, modern space fit for the 21st century and acts as an inspirational gateway for passengers to the UK’s second city.

“This is a fantastic achievement for the whole team involved. This station has been transformed over the past five years with an iconic architectural design supported by the engineering excellence of the delivery partner who embraced the need to innovate in order to make this highly complex project happen.

“It’s great to see passengers rising up from platform level, even six months after opening, over awed by the vast space created by the atrium centre piece. The sinuous ribbon of stainless steel enveloping the exterior reflecting the movement of trains, people and even the clouds in the sky embraced the spirit of the concept deign.”

“The improvement of this station is just phenomenal. We have built five new entrances and exits providing better means of moving in and out of the station as well as improved access for the disabled.

“We have also created three new waiting areas where you can access clear train information, great retail outlets and extra seating. This increases the safety of passengers by providing areas people can go if platforms become too crowded.”

Between 2010 and 2015 the team working on the project came together with a vision for the transformation of the station that would benefit the people of Birmingham and the regions around the city. The station is a prime example of how to successfully deliver engineering excellence in a complex urban environment. The end result is that Birmingham has a stunning gateway that befits the city and its people. 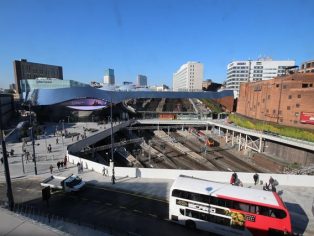