Public realm specialists, re-form landscape architecture, has been appointed to deliver the next phase of major masterplans at two of the UK’s leading universities.

The new projects at Nottingham Trent University and the University of Lincoln add to the company’s extensive higher education portfolio, as an increasing number of facilities recognise the transformative impact of investing in campus public realm.

re-form, which has studios in Leeds and Manchester, designed a strategic landscape masterplan for Nottingham Trent University in 2011 which included designs for a multi-million ‘heart of the campus’ development which opened in September 2015. It encompasses two state-of-the-art buildings framing a new central piazza space. re-form has now unveiled the first images of the next phase of the masterplan, which incorporates the public spaces around a new student park and routes linking it through to the ‘heart of the campus’ development. Work is expected to begin on site later this year.

The 13 strong company has also been appointed to deliver the next phase of its landscape masterplan for the University of Lincoln, which sets out a public realm vision for the entire city centre campus. The University is ranked third best university in England for students being able to walk between their accommodation and lectures, having spent around £200 million on its state-of-the-art Brayford Pool campus – which featured landscape designs by re-form – with a further £130 million earmarked to improve the student experience further over the next few years.

re-form is now delivering the refurbishment of a major public square, as well as public realm improvements and linkage routes between the new Lincoln Science and Innovation Park (LSIP) – a 12.6 hectare scheme which is being developed in stages over the next decade to offer world class laboratories and research facilities – and the award-winning Brayford Pool campus. re-form’s approach is to create spaces which encourage interaction – be it social or educational – in a way that is sustainable and well connected, meeting students’ needs throughout the day and encouraging them to more fully utilise the facilities provided on campus.

“Having worked with both universities for several years now on public realm and campus masterplans, it’s fantastic to continue our involvement and to see our concepts brought to life.” 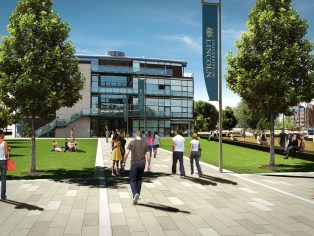