Public realm specialists, re-form Landscape Architecture, have expanded into the North-West, opening a second office in Manchester following a series of project wins in the region.

The company, which opened in Leeds in 2011, has taken up office space at The Hive on Lever Street in the Northern Quarter. The Manchester team will be headed up by David Livesey, who joins re-form as Associate having worked in the city for more than a decade on a range of schemes including Manchester City’s training ground and public realm improvements at Exchange Quay in Salford. David will work with directors and company founders Guy Denton and Andrew Price to grow the team and harness the diverse range of public realm investment opportunities in the region.

re-form has worked on a number of high profile schemes in the North-West including two public spaces in the centre of Wigan which set the standard for the town’s long term streetscape improvement strategy, and New Bailey Street’s ‘pocket park’ in Salford. Other projects in the region include a public square at Greengate opposite Manchester Cathedral; the transformation of public spaces at both Liverpool University’s City Campus and Preston College, and a 20 hectare YMCA woodland activity and training centre on the shore of Lake Windermere in the Lake District National Park.

“We knew that rather than continuing to grow our team in Leeds, we wanted to expand into new regions and, having worked on many fantastic projects this side of the Pennines, Manchester was an obvious choice for our second office. I think now, more than ever, with the Northern Powerhouse and Devolution rising up the agenda, towns and cities in the region are looking to reinforce their identities, realising the social and economic value of their public spaces and the important first impression they create.”

The 13-strong team has built a reputation for conceiving, enduring and inspiring landscape and public realm schemes, supporting clients from initial design stages through to completion. Current projects nationwide include Hull’s £25million public realm project, which will see the complete redesign of the city’s streets and public spaces ahead of its UK City of Culture status in 2017; a new city square on Sovereign Street in Leeds, and a masterplan for the University of Lincoln.

“This is a great time to boost re-form’s offering in the North West, with ambitious developments taking shape, such as Allied London’s St John’s scheme in Manchester and investment in Liverpool which is keen to encourage businesses to locate in the city. We’ve already welcomed our first graduate to the team; Tom Daggers, who graduated from Manchester Metropolitan University with a Masters in Landscape Architecture, and recruiting home-grown talent will be key for us as we build our team here.” 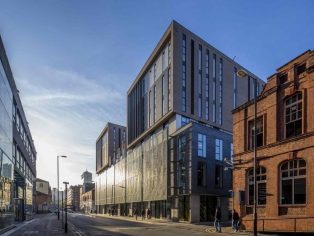 re-form open new office at The Hive in Manchester