The first new city centre public space in Leeds for more than a generation has opened to the public. Designed by Leeds-based public realm specialists, re-form Landscape Architecture, the £2.5 million Sovereign Square scheme sets the standard for public realm in the city centre.

The new square, situated on the Leeds City Council-owned Sovereign Street site, features undulating lawns;a tree grove; a diverse range of seating (soon to feature WiFi); water features and a large rain garden. It will be a thriving public space for hundreds of workers and visitors, as well an attractive new link from the city centre through to the Council’s South Bank Leeds regeneration area.

The space brings to life re-form’s innovative design, which takes inspiration from the history of the area which is situated on the line of an old water channel from the River Aire that once powered industrial mills on the site. Water is a significant element of the scheme, and the former water channel is echoed by a 100m long water rill which transports the water through the square, connecting a stunning plaza water feature to the river.

The fountain plaza, designed in conjunction with Fountain Workshop, bursts and bubbles with water jetscontrolled by an elaborate system of computer sequences, moods and effects, representing the cracked limestone pavement landscape of the source of the River Aire at Malham Cove. The space also features a rain garden that manages surface water run off in a sustainable way, reducing the risk of flooding while bringing an ecologically rich habitat to the city centre.

As well as offering new public space, the square also provides the setting for three major new office schemes including the Leeds headquarters of KPMG and Addleshaw Goddard.

“It’s fantastic to see our concept brought to life. We worked to carefully combine each feature of the square, from the plant species to the seating types and the movement and light generated by the water rill, to create a beautiful place that is a setting for public life in the heart of Leeds city centre.

“We hope that the square will be well used and loved by local people for years to come, and sets the benchmark for more high quality public realm in Leeds.”

re-form Landscape Architecture has worked on a number of high profile public realm schemes across the UK, including Hull’s planned £25 million public realm project which will see the complete re-design of the city’s streets and public spaces ahead of its UK City of Culture status in 2017, and public realm strategies atNottingham Trent University and the University of Lincoln. 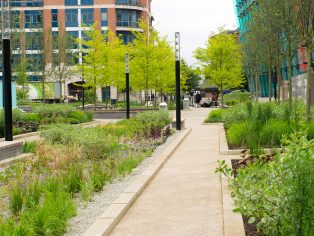 A 100m water will connect a new fountain plaza to the River Aire. Credit Simon Vine

A rain garden manages surface water run off in a sustainable way, reducing the risk of flooding. Credit Simon Vine