Re-form Landscape Architecture has been appointed to a trio of high profile riverside public realm projects in Leeds city centre. The series of schemes at City Reach, Whitehall Riverside and the former Yorkshire Post site, will transform Leeds’s underused waterfront; harnessing the unique qualities of the River Aire and raising the standard for quality, waterside public realm in the city.

The 14-strong team, which is based at Tower Works in Holbeck Urban Village and recently opened a second office in Manchester, produced designs for new public spaces for the City Reach project, a planned residential scheme by Residential Securities located on the former Yorkshire Chemicals site adjacent to the river. The development, which received outline planning consent earlier this year, will feature almost 800 new homes (including 574 PRS properties), 234 student apartments and 20,000 sq ft of commercial space.

Re-form’s designs include a new riverside ‘pocket park’ as well as a series of new streets and shared spaces including urban squares and semi-private courtyards, creating high quality spaces where people can meet and socialise. The plans also incorporate the refurbishment of an existing pedestrian bridge, creating a key link over the river to the nearby Otter Island development.

Re-form is also developing a landscape strategy for the next phase of Town Centre Securities’ (TCS) Whitehall Riverside scheme. The development is a key business hub, already home to No 1 Whitehall Riverside and Whitehall Plaza, and the next phase includes 300,000 ft²of Grade A offices, cafes, bars, a hotel and a new multi-storey car park. re-form helped TCS achieve outline planning permission for the masterplan in 2014, using its riverside location as a focus for the strategy. The team has now been appointed to take the development through the detailed planning application process, which is due to be submitted this month. Key elements include a stepped terrace overlooking the water which will be connected by a series of pedestrianised streets. Flood management is a major component of the scheme, and re-form has developed a sustainable approach to surface water management including a series of ‘rain gardens’. The designs will also enhance views of surrounding historical landmarks including the 165-year-old Lifting Tower at Wellington Place and the trio of Italianate towers at the neighbouring Towers Works development; creating an inspiring setting for businesses and a much-needed new waterside destination for city dwellers and visitors. Re-form has also been appointed by TCS to its Piccadilly Basin scheme in Manchester – a 5.9-hectare waterside development featuring office, residential, retail and leisure space on the banks of the Rochdale Canal.

YP Real Estate Ltd has appointed Re-form to create new public spaces at the site of the former Yorkshire Post building, which will form a major new gateway to the city. re-form is leading on the landscape and public realm proposals for the project which comprises a mix of commercial, leisure and residential uses, breathing a new lease of life into a previously inaccessible stretch of riverfront. The new scheme will feature a series of open spaces including a major new urban square that will be constructed over basement car parking.

“The river was once the main artery of the city, and we hope that our designs will have a rejuvenating effect; opening up the waterfront once again by creating green, well connected, social spaces for people who live, work and enjoy the city centre. We are creating places that attractive, but also perform an important function by contributing to flood management and increasing biodiversity.

“It’s encouraging that more public and private sector organisations are looking to harness the transformational effects of investing in high quality design in our public spaces. We look forward to working with our clients to see their ambitions realised.”

Re-form recently celebrated the opening of Sovereign Square – the first new public space in Leeds city centre for more than a generation. The innovative design includes undulating lawns, a rain garden and a 100m-long water rill which transports water through the square, creating a fantastic asset for the people of Leeds and a beautiful setting for businesses.

Re-form Landscape Architecture has worked on a number of high profile public realm schemes across the UK, including Hull’s planned £25 million investment which will see the complete re-design of the city’s streets and public spaces ahead of its UK City of Culture status in 2017, as well as public realm strategies for Lincoln’s historic city centre and for the centre of Lichfield. 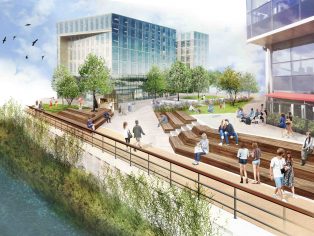