The Wallace Collection has reopened the stunning Great Gallery after a two-year rebuilding programme led by architects, Purcell.

The Great Gallery was originally built by Sir Richard Wallace between 1872-5 as part of his major extension of Hertford House to accommodate his collection’s move from Paris to London. As was typical for great private residences, the Gallery was positioned behind the private living quarters in order to create a magnificent impact at the culmination of any visit. Constructed over what had originally been a mews behind the house, the vast space would have been hugely impressive to the small groups of guests who were privileged enough to be shown the collection. It is now hugely impressive, once again.

Described as “the greatest picture gallery in Europe” by art historian Kenneth Clark, the Great Gallery is a collection including many familiar works. The display features some of art history’s most famous sights, including Hals’ The Laughing Cavalier, Rubens’ The Rainbow Landscape, Poussin’s A Dance to the Music of Time and Velázquez’ The Lady with a Fan.

The intricate construction work, now completed, was carried out while the building remained open to the public, and has involved almost a complete reconstruction of the Gallery within the retained external walls. This part of the building had been subject to many alterations since the late nineteenth century and the current work has stripped away more recent insertions but reused the original curved steel structural members around which the roof is formed.

The ceiling has been entirely renewed to reintroduce natural daylight (which is carefully conservation-controlled) and incorporate the environmental control in a much more visually sensitive manner than when it was first introduced in the late 1970s. This has also allowed the architects to reference the original coved form of the ceiling with its delicate trellis plasterwork ornamentation in the new design. In developing the scheme for the Great Gallery, Purcell collaborated with John O’Connell of Dublin, with whom they have successfully worked on over a dozen previous gallery refurbishments at the Wallace Collection.

The careful structural insertions were designed by the Morton Partnership, and the services reconfigured by Project Design Services. The sensitively implemented combination of natural and artificial lighting, involving LED technology and a series of automatic blinds and louvres, was designed by Sutton Vane Associates.

The Pompeian red silk was specially woven by Prelle of Lyon to a historically appropriate pattern researched from the weavers’ huge archive. The pattern can be read clearly between each painting and the use of a brocatelle gives a sculptural quality to the surface of the silk hanging. The wainscoting is also used to sculptural effect, and has been gilded to increase the sense of monumentality of the gallery. It also provides a grounding for the paintings, allowing them to be hung at different heights in a way not previously possible. The gallery’s two doors were moved during the refurbishment, and instead of being close to the corners of the room, creating a dead space in the angle, they have been moved closer together allowing room to hang large pictures on either side of them. During the course of the work, the opportunity was taken to make other less visible improvements, such as insulating the walls and roof and providing the opportunity for incorporation of sustainable technologies.

Constructing the re-configured gallery was challenging and the contractor, Coniston, was required to work to unusually fine tolerances that were necessary to ensure coordination of the original structure, new steelwork, and fibrous plaster finishes around the new glazed lay-light. The trellis pattern on the mitred and coved sections of ceiling meant that any setting out or construction inaccuracies would have been easily detectable in the finished work.

“The members of the design and contracting team have enjoyed long working relationships, both with each other and with the knowledgeable staff of the Wallace Collection, built up over several previous projects. The stunning work now being revealed in the Great Gallery stands as a testament to that excellent teamwork employed to complete the project to an extremely high standard. The ambience and lighting in the gallery, despite its size, encourages an intimate relationship with the artworks, and the richness of the architectural finishes and detailing is an appropriate setting for these internationally significant works. We are delighted that this has already been recognised by the art critics benefiting from recent early viewings, who have been pleased to go into print with their praise.” 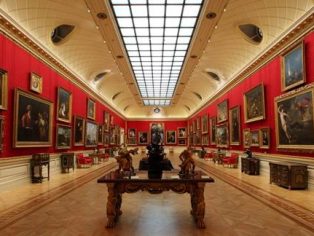