Pump specialist T-T Pumps look at what specifiers need to know when it comes to sewage pumping stations.

Selecting a pumping system can be a complex and time-consuming task which can involve several hundred calculations to ensure optimum efficiency, reliability and compliance. The key to streamlining this process is to understand the functions of a pumping station, the design challenges involved and the installation practices required.

Some of the main areas which need to be borne in mind by specifiers undertaking such installations include the following:

A sewage pumping station is usually used to move sewage and surplus water to a sewer or sewage treatment works. In a nutshell, when gravity cannot be relied upon, a pumping station is installed to shift the water from one place to another. These systems are designed to act as a collection point for waste water and are stored in a large chamber from which they pump the liquid into the main sewer.

The chamber is a key part of the system, which also consists of pumps, pipework, guide rails, auto coupling assemblies and float switches. A separate valve chamber may be required as well as a control panel to run and monitor the pumping station.

There are two main options of pumping stations to choose from: adoptable or non-adoptable.

These systems usually serve domestic applications, office premises, commercial/ industrial properties, hotels or nursing homes. A non-adoptable pumping station, also known as private pumping station or package pumping station, is designed to be economical to install and does not require compliance with the water companies’ specifications.

These pumping stations are quick and easy to install and require less space to accommodate them within the sewage network. They typically contain a pre-formed chamber element that is assembled off-site along with its own internal pipe work and valve system, and is then delivered to site in short timescales. The package pumping station is taken from a range of standard designs available on very short lead times.

Due to private pumping stations not being ‘adopted’ by the appropriate water company, the property owners are responsible for the running and maintenance costs.

Adoptable pumping stations’ name is derived from the fact that they are ‘adopted’ by the relevant water authority, who then become responsible for them.

An adoptable pumping station is designed and installed to suit the required water authority specification. Each station is constructed individually and to site-specific drawings. The chamber well is built using concrete rings and engineers then place the pipework and valve assemblies in situ.

Adoptable pumping stations can be utilised in multiple housing developments as well as commercial properties. In order to achieve adoption, a pumping station’s specification, build and installation must be compliant with the relevant local water company requirements. This means they have to comply with the current requirements of ‘Sewers for Adoption’ – the standard set for the design and construction of sewers in the UK – before being adopted by the local water company. This process can in turn result in longer lead times.

Selecting a good pumping system is critical to its longevity and performance, and specifiers will be required to supply a range of data about the site, including a series of measurements, materials and capacity.

When there is an inflow into the pumping station, the level rises. Once the liquid level increases, the start float switch level control tilts upwards, which sends a message to the control panel to switch the pump on. The pump sends the liquid through the discharge pipe and the level begins to drop. The float switch level control then tilts down, sending a message to the control panel to stop the pump. The level in the discharge pipe falls back, but is prevented from falling further by the non-return valve closing. The cycle continues as the inflow causes the level in the chamber to rise again. 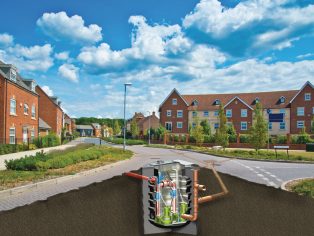 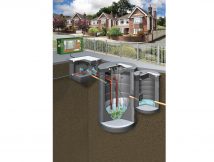