The value of work starting on site in the three months to August was 10% lower than during the same period a year ago, according to the latest Glenigan Index. On a seasonally adjusted basis, starts were also 7% lower than during March 2017 to May 2017.

“The value of projects starting on site has weakened over the summer months. The decline is in part due to public sector projects being temporarily delayed by the snap general election, with education, health and infrastructure starts down on a year ago. However there has also been a recent weakening in a number of private sector areas, including office and retail projects. In additionprivate residential starts faltered during the three months to August after firm growth earlier this year.

“Private residential starts slipped back 3% during the three months to August and were 14% down against a strong performance a year ago. The drop follows a strong rise in project starts earlier in the year and is against a backdrop of a cooling in property transactions in the wider housing market. In contrast, there has been an encouraging upturn in social housing starts, which on a seasonally adjusted basis were 15% up on the preceding three months and 9% higher than a year ago.

“Overall non-residential projects were 12% lower than a year ago, but on a seasonally adjusted basis were 16% down on the preceding three months. The health sector has seen the sharpest decline, with starts down by over a third on a year ago and against the preceding three months. There was also double digit year on year declines in the education, office and retail sectors. These declines were accompanied by a 6% drop in office project starts. Whilst industrial starts were also 12% down on the previous three months they were 11% up on a year ago; a period when many industrial projects were being reviewed during the immediate aftermath of the Brexit vote. In contrast, hotel & leisure project starts remain ahead of a year ago.

”Civil engineering starts were 12% lower than a year ago, driven by a weakening in both infrastructure and utilities projects.”

There were sharp variations in project starts across the country. Whilst most parts of the UK have seen a decline, the value of project starts rose in the northern half of the UK, with year on year increases of 26%, 25% and 29% in the North West, Yorkshire & the Humber and Scotland respectively. The East of England also saw strong growth with starts 24% up on a year ago. 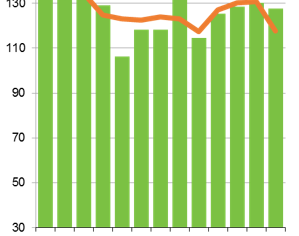