A Leading external envelope contractor Prater has delivered an exemplary building envelope for the £30 million refurbishment of Ark Putney Academy, a secondary school in Putney, West London. The project overall has resulted in the creation a 21st century learning environment whilst sensitively preserving the heritage of its existing Grade II listed main school building.

The ground-breaking London County Council’s department of architecture, also responsible for the iconic Royal Festival Hall, originally designed the school, formerly known as Elliott School, in the fifties. However, time had taken its toll and the buildings were in need of essential repairs and modernisation, showing signs of substandard classrooms, dilapidated cladding and year-round problems with heating, cooling and ventilation.

Internationally-renowned award winning practice Hawkins\Brown has worked with Lendlease and the London Borough of Wandsworth to re-furbish, re-model and re-imagine the school, now known as Ark Putney Academy. Prater was appointed for its technical expertise and operational capabilities to deliver, demonstrating the best solution for this challenging project. Commenting on Prater’s performance, Lendlease’s John Fifield, Project Director, Construction, Europe said:

“Prater carried out and successfully completed this project for Lendlease with a flexible approach to achieve the design requirements demanded by the Grade II listed buildings”.

One of the key challenges was the delivery of the replacement glazing to the ‘Zig Zag’ staircores to the main building explains Prater Project Manager, Mike O’Boyle:

“Curtain wall elements were integrated into the main facade with curtain wall screens connected back to the Grade II listed floating staircase landings – it was a real challenge but looks great.”

“The school was temporarily moved into accommodation on existing school land and was live throughout the construction process. This meant working closely with the school, and the local community, to ensure the complex logistical deliveries were carried out with minimal disruption.” 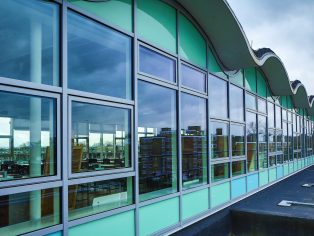