James Parker spoke to an emerging young practice to find out how they got off the ground in Cornwall, including putting a focus on using virtual reality to give clients exactly what they want.

Märraum Architects is an exciting new practice in fashionable Falmouth, Cornwall which has gone from to strength to strength in only a few years with some impressive residential renovations under its belt. Originally launched from German-born founder Michael Hormann’s spare room in 2011, the firm recently moved to new riverside premises he designed in Penryn, just outside the town.

The name Märraum is itself an interesting construction of Michael’s, to reflect the ethos of the firm – assembled from the German ‘Marchen’ folktales combined with the German word for space, ‘raum.’ As co-partner and architectural technician Adam Laskey says, “it’s the story of space, the creation of space.” ‘Mär’ also means sea, alluding to the firm’s HQ which helps inspire many of its designs.

The practice is headed up by three directors – Michael and Adam, plus Adam’s wife, Daisy Sawle, who is responsible for the overall running of the practice, business development opportunities and finance. In addition there’s trainee technician Ed Piotrowski and Mina Booth, office coordinator and PA to the directors. Michael & Adam previously worked together at CAD Architects based not far away in Truro, and remained close friends when Michael was made redundant along with several other colleagues when the recession hit.

“Me, Daisy and Michael have all known each other since we were about 18, working together in different jobs locally, from bike hire to wedding catering to running a cafe.” He assures ADF that working closely with his spouse in the practice is actually a bonus: “We spend a lot of time together but we are one of those unusual couples that can tolerate each other 24 hours a day.”

With projects coming thick and fast, last September Märraum decided that, in Adam’s words, it was to time to “refine and reform” its offer. The firm decided to move next door to a space twice the size, and take on Mina. The decision to move partly came from the involvement of local accounting firm The Peloton which helped mentor the team, and encouraged them to expand. Says Laskey:

“Gut instinct had got us from a sole trader to where we were, but was not going to take us to the next level.”

The new building is a large unit in a former storage warehouse, with a central atrium as the key focus, containing a big communal dining table. As Laskey says,

“in other developments you’d stick three or four more units in, but we wanted the space, and the sense of light.”

He says Michael’s design, as well as the fairly idyllic setting, has led to reduced stress levels. This is also helped by other amenities such as a comfortable area with sofas and a library, not to mention “the ability to open the back doors and dangle our legs over the water.”

The building has what is perhaps an even more important role when it comes to meeting clients, as the firm took the brave decision to not do initial ‘free of charge’ site visits – purely because the competition did it this way. Instead Märraum invites clients to come to Penryn to meet everyone that will be involved in their project, the new office providing the perfect setting. The firm believes that this is essential to communicating the benefits of its approach including a diligence in delivering exactly what a client requires.

Laskey admits that some clients do question the approach:

“No- one does it, why are you?” But he adds: “as soon you explain the reasons, they are normally on board. People may say ‘I’m not coming to you, you’re 45 minutes away, but my reply is ‘exactly’. I can’t travel that far and get nothing from it, it goes both ways.”

He says that establishing the initial confidence of the client having seen the whole team is important for the client as well as the practice.

“It makes sense for them, because they’re making sure they’re employing the right team; it will never just be one person.”

Another “turning point” for the growing firm, says Laskey, was refining how it presented itself to the market. Initially Michael’s strong network enabled him to win jobs via word of mouth, but a difficult period following a scheme falling through led to an urgent discussion around how to improve the flow of new business.

“We found our website was a weakness, it was not found on Google,” he says. “We made a big decision to make a large investment in improving it, and it was the best decision we ever made.”

The result is the highly engaging and SEO-friendly www.marraum.co.uk, and it wasn’t long before the firm was climbing the rankings. The practice is currently the top Cornish architect on Google, showing the power of a good website.

Laskey says that the site has not only led to competitors adopting a similar look, but it has led to a situation where the firm is now turning work down:

“We are getting more enquiries than we can undertake.” However he says this is a good problem to have: “It means we are getting the best projects for us as well as our clients.”

Laskey describes how the firm’s approach – demonstrated initially in renovating domestic properties within a 10 mile radius of Falmouth – centres on a focus on the client’s space needs.

“We will look at your house and not build an extension just because you want one, but look at how you use the space. The room at the back that’s cold and damp and full of boxes, how can we incorporate that into the space to improve it, rather than building something new and still having the same problem?”

He is also very proud of the accuracy that the firm is able to achieve thanks to its investment in ArchiCAD software which enables the team to design in 3D. On a current high-end new build residential scheme on the desirable Roseland peninsula, he says

“the contractors are building a very complicated cranked roof, and we are 4 mm out over a 7 metre length.”

“I was always told ‘we’ll work it out on site’ – but I’m being paid to work it out, that’s my job, and there’s no reason why I shouldn’t.” The house was built to scale in ArchiCAD, he says, “so every roof truss, rafter and hip was plotted in three dimensions, and nothing has gone away from the plans.”

One of the practice’s most demanding renovations yet was at a prestigious but dilapidated house on Dunstable Terrace on Falmouth, which led to three further jobs on the same street.

“The building had been renovated so many times that we weren’t able to find what was load bearing and what wasn’t,” says Laskey. “The floors were falling apart, so we said strip it and start again.”

Other key projects have included the conversion of a Grade II listed former schoolhouse in Devoran, Cornwall (undertaken by Hormann as a sole trader but working with another architect – the late Chris Hendra) into two private dwellings for a couple and their children.

Another outstanding project – this time in the village of Feock – was a major renovation and extension of a simple two-storey timber chalet into a desirable house with views down the valley to the sea, with a high quality finish and materials. Its light, open plan internal areas led to it being used as an ‘inspiration’ project on TV’s Building the Dream. Laskey says the clients are very happy, and adds “we have maintained a nice relationship with them.”

Thanks to further recent investment, the practice claims to be the first in Cornwall to offer virtual reality as part of its standard package to clients. This followed a conversation between Adam and computer programmers Sarah and Andrew Davey of Equin Ltd):

“I said everything we do is based on 3D modelling and ISC files, so surely we can bring that into BIM and I can send it to a client to get a VR experience of a design.” The friend then found three programs that interact; Märraum then trialled it with great success on the Roseland residential project, and as Laskey says, “the first reaction from the clients was ‘wow.’”

The firm now offers a free VR experience of any stage of a project – delivered in its conference room, and produced in around 15 minutes. A major practical benefit of VR beyond the simple excitement of experiencing the ‘real’ building before it’s built, is that it enables clients to understand, and help make, design changes:

“Explaining to a client what certain aspects of a space will be like in 2D is incredibly difficult, but VR is very helpful for giving clients options,” he adds, giving the example of a current client who is extending a bungalow upwards into the roof space, necessitating removing and replacing the roof.

With a tricky balance to strike between permitted building height and adequate head room, VR was ideal to show this client, who has arthritis, how much head room she needed. “500 mm higher was OK in theory but testing it in VR made her duck – so we increased it to 800, which made a huge difference but was within limits.”

VR is also useful for helping explain things to the planning author- ity, he says – “there are certain things you do that they can’t ‘feel’ in 2D,” and with contractors –

“on one complicated project we had the builders in the office and they looked at the VR walkthrough – they then decided to get a specialist to build the staircase.”

As the practice and its reputation have grown, the team has had to be flexible regarding their mix of job roles, with Michael and Adam in particular having to accept compromises. The initial intention was for Adam to do more design work and for Michael to be able to get involved in initial client meetings. However as Märraum’s workload has increased, they have had to concentrate more on, respectively, front-end scheduling and new business, and design delivery. 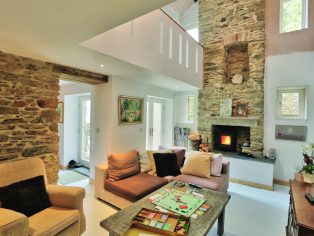 The practice rescued a fairly dilapidated house in Dunstable Terrace, Falmouth and turned it into a desirable double-height residence