The Post-earthquake reconstruction/demonstration project of Guangming Village has been declared the World Building of the Year 2017 this evening at the tenth annual WorldArchitecture Festival, held in Berlin. The scheme was designed by The Chinese University of Hong Kong.

Following the Ludian earthquake in 2014, most of the local buildings in Guangming were destroyed.  This project reinvented the traditional building technology, providing villagers with a safe, economical, comfortable, and sustainable reconstruction strategy that they could afford, own, and pass on to their children.  A prototype house was built for an aged couple to validate the technology and building performance of the new system.

The judges believed this to be an extraordinary project in terms of the scope of ambition, exemplified in the addressing of profound problems facing ordinary people. They applauded the re-use of traditional material and construction methods but with the addition of new technology – combining ancient wisdom with modern know-how.

The judges were also impressed by the iterative research process which could be re-applied to anywhere in the world affected by seismic problems and low levels of wealth. “The architects succeeded in translating ‘four walls and a roof’ into something which, through architectural commitment, becomes a project that is much more profound,” WAF Programme Director Paul Finch commented. “This building is a demonstration that architecture is just as relevant in the poorest of communities as it is in the richest.”

Due to the high standard of category winners presented in the first two days of WAF, the super jury decided to confer a Director’s Special Award to Superlofts Houthaven in Amsterdam by Dutch practice Marc Koehler Architects. A new co-housing concept that aims to create a global network of local building co-operatives, judges said the concept is “a game changer – a replicable and transferable model which could extend in terms of scale.”

The World Building of the Year and a host of other top awards were presented this evening at a glamorous gala dinner for over 800 international architects at The Postbahnhof – Wilhelm Tuckermann’s Gothic masterpiece which is located in the heart of Berlin.

The Post-earthquake reconstruction/demonstration project of Guangming Village is now the tenth project to claim the illustrious title of World Building of the Year, since its inception at the inaugural World Architecture Festival in Barcelona in 2008. Following four years in Singapore, this is the festival’s second year in Berlin, where over 2,000 architects from across the globe have convened for three days of debate and discussion.

The Future Project of the Year 2017, which celebrates the best of the world’s architecture that is yet to be completed, is the Sydney Fish Markets project by Allen Jack+Cottier and NH Architects.

WAF’s Future Project super jury, comprising Mark Dytham (Principal, Klein Dytham Architecture), Isay Weinfeld (Founder, IW. Arquitectura) and Monica von Schmalensee (CEO, White Arkitekter) selected the project for “the great transformation it offers to the area” commending it for its vision beyond the brief.” Its success stems from the engagement and collaboration with politicians, developers and land owners.” The Sydney Fish Market won as the project transforms a world bigger then itself. The architects executed their role in an exemplary and inspiring fashion.

Landscape of the Year 2017 was awarded to Peasants and their Land: The Recovered Archaeological Landscape of Chengtoushan, Lixian County, China by Turenscape. The judges felt that this project reflected a hopeful and creative mixture of archaeological history, rice production and tourism. The landscape project is based around a live 6,500 year-old archaeological site which has been protected by the local government of this rural province. The judges were impressed with the “productive engagement between visitors and farmers who are able to maintain their traditional livelihoods”.

The Small Project of the Year was awarded to Eriksson Furunes + Leandro V. Locsin Partners + Jago Boase for Streetlight Tagpuro – “a genuine good news story, whereby a community engagement process led to an authentic and high quality result.” The project involved the relocation of NGO Streetlight’s office, orphanage and study centre in the wake of super-typhoon Haiyan.

The Best Use of Colour Prize, supported by Eastman, was scooped up by Iredale Pedersen Hook Architects for the Fitzroy Crossing Renal Hostel in Australia, a project where judges found the use of colour to be “sensitive, elegant and well balanced.”

The building provides a long term accommodation facility for Aboriginal people from outlaying communities receiving renal dialysis. The aim of the centre is to humanely support the needs of the residents, who may be self sufficient and independent, or may have a carer living with them. The architecture facilitates a safe environment to wander and gather with occupants, family, friends and the community.

Light is filtered through the coloured screens that run along the side of the structure. Judges praised the practice for “a design that uses holistically integrated colour relative to the landscape and the local community. As the project’s main function is healing, the use of colour creates an emotional context that is deeply supportive and nurturing.”

The annual display of shortlisted entries from the Architectural Photographer of the Year Award, now in its fifth year, was a highlight of the Festival Hall stands, with delegates voting for their favourite image over the course of the Festival. This year, the prize was won by Terrence Zhang for his striking image of the Swimming Pool at the New Campus of Tianjin University in China, which was designed by architects Atelier Li Xinggang.

Terrence Zhang’s photograph captures shafts of sunlight entering above the swimming pool and playing on the water. The image is framed beautifully by the curved ceiling arches of the structure’s roof. The prize is supported by Sto, and following the festival, all shortlisted entries will be exhibited at Sto Werkstatt in London, as well as being exhibited at a gallery in Beijing.

The prestigious £10,000 prize for the Architectural Review Emerging Architecture Award 2017 went to Paris-based practice Avenier Cornejo Architects for their 17th Arrondissement social housing project, Rue Bonet. The Emerging Architecture Award celebrates the most talented architects under the age of 45, granting early recognition to young designers. The Rue Bonet project comprises 38 apartments in a urban plot of just 430 square metres. Judges commended the project for its realisation of social housing in a challenging urban environment and the ambition to tackle important and pertinent social issues.

This year WAF has given a unique recognition to the best completed building by an Iranian practice from the last three years.

The Iran Special Prize was won by New Wave Architecture for the Pars Hospital in Tehran, which topped a shortlist of eight Iranian projects. Completed in 2016, the hospital was praised by judges as “a design that understands and confidently solves the puzzle of a large hospital and reaches a resolution of public spaces, links and views that makes a delightfully coloured and light place of repair and recovery.” 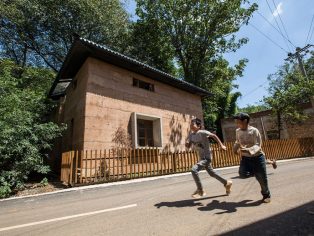 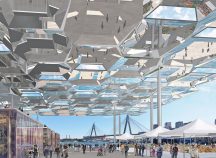 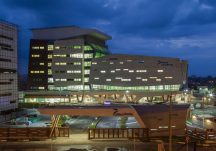 Landscape of the year: Turenscape_Peasants and their Land, The Recovered Archaeological Landscape of Chengtoushan

Architectural Photographer of the Year Award 2017: The Swimming Pool by Terrence Zhang