A major residential scheme designed by Broadway Malyan after successfully winning a design competition, has been submitted for planning.

The proposal for 375 new homes in Walton-upon-Thames are spread across eight buildings and is set to replace the former Birds Eye headquarters which has stood empty for more than a decade.

The existing development, designed by Burnet, Tait & Partners in the early 1960s, is Grade 2 Listed as one of the first corporate headquarters buildings developed outside of the capital. The landscaping, which includes a reflective pool, and a sculpture installed when the headquarters was first developed are also listed.

Unfortunately, the load-bearing superstructure of the main office block is constructed using pre-cast beams comprising High Alumina Cement (HAC) which was subsequently banned due to its potential for catastrophic structural failure. The building now has a limited lifespan and despite significant investigation into the feasibility of replacing the superstructure and a failed external façade that meets modern standards, it is now felt that replacing the building is the only financially viable option.

Stuart Bertie, who has led Broadway Malyan’s design team from its Weybridge studio, said the design approach for the new development was a result of a careful analysis of the original design elements of existing building and its setting.

“The striking design of the existing building with its strong horizontal rhythm created by the half hexagonal aluminium pattern of the façade has been a key influence in designing a scheme that we believe is a worthy replacement architecturally while also providing a new landmark on this important site in Walton-upon-Thames.

“The proposed site layout is derived from the formal geometry of the existing development. A central ‘jewel’ building with an enclosed formal residential courtyard will be nestled among proposed brick buildings that will offer an architectural counterpoint to the main building.

“Rather than create a facsimile of the Listed façade, our proposal preserves the repetition and rhythm but reinterprets the hexagonal effect of the existing elevation with full height angled façade components that evoke the original pattern but offer a constantly changing façade throughout the day through relief and shadow,

“The brick buildings, by contrast, offer more solid and carved elements that help bed the scheme into the neighbourhood.”

The application also includes a significant landscape proposal for the six hectare site that draws on the ordered geometry of the original Birds Eye masterplan. This includes a series of streets and open spaces line with new and existing mature trees and planting within the streetscape to create rhythm, along with feature paving and a reflective pool that mirrors the façade of the central building when viewed from Station Avenue. The landscape and architectural approach have been designed in parallel to create a strong sense of place and community for future residents.

The application has been made on behalf of Crest A2Dominion and will be determined by Elmbridge Borough Council in summer 2017. 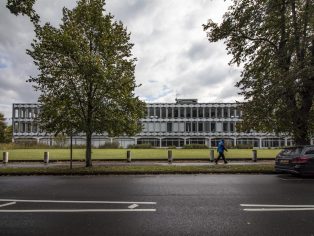