Proposals for a new residential-led development, half a mile from Brighton’s famous beach, have been submitted for planning.

The Lyon Close scheme, which has been designed on behalf of developer Crest Nicholson, comprises 163 one, two and three bedroomed apartments in addition to 1,000sqm of commercial space.

The aspiration of Lyon Close is to create a new community with a third of the apartments either affordable or earmarked for shared ownership while the layout principles include a well-designed environment for community cohesion with a high quality landscape that offers a sense of enclosure and privacy.

The design includes four buildings ranging from five to 10 stories with an enclosed shared garden for all residents, accessible from each of the residential buildings. The landscaped gardens will also include dedicated children’s play space.

Broadway Malyan director Stuart Bertie, who has led the design project from the practice’s Weybridge studio, explained that while the project responded to its local context, the aim had been to create a scheme with its own architectural identity.

“This is a major development site in Hove and it was important that we designed a project that not just provided much needed high quality housing in the area, but also responded positively to its surroundings.

“The scheme is designed to be simple, clean and crisp with a clear architectural idea that is both contextual and forward-looking. We have chosen a material palette of three types of brick and perforated metal that complement the surroundings without being a pastiche of Brighton’s existing urban fabric.

“As the design is simple in its approach, the detailing of the building is important with elements including metal vertical balustrading and corbelled brick details to the base storey that reference local historical buildings.

“The positioning of the buildings has been driven by placemaking principles with clear arrival spaces and legible entrances. The layout of the buildings allow long views through the landscaped gardens for neighbouring residents while the landscape itself is an archipelago of planted islands which creates a pedestrian focused environment, guiding movement and forming safe, usable spaces.” 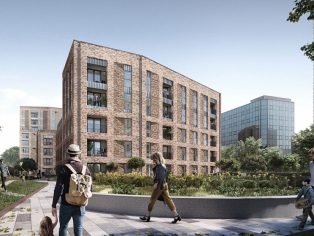 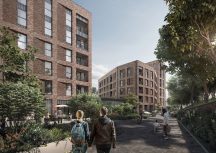