Plans for national custom and Self Build Week 2014 are unveiled

There has been a year-on-year increase in the British public’s intention to get a custom designed home built for themselves. That’s the result of an exclusive Ipsos MORI poll commissioned to mark the launch of this May’s National Custom & Self Build Week (NCSBW).

The survey found that one in seven (14%) Brits (around 7 million people) will research how to build a home for themselves within the next 12 months; this is an increase from 2013, where one in eight were undertaking the same research. The poll also suggested that around one in 50 expect to buy a building plot, obtain planning consent or start construction work on their own new home during the coming year or so.

This growing interest in the sector is one of the reasons why the focus of this year’s event has widened to include Custom Build, alongside Self Build. The week is organised by the National Self Build Association (NaSBA) and runs in conjunction with the Grand Designs Live exhibition (3-11 May). Many of the main events will take place during the Grand Designs Live show at London’s ExCel, though there will also be scores of other activities happening all around the country.

The Government is very keen to see the self and custom build sectors grow, which is why Housing Minister Kris Hopkins MP has welcomed the promotional impact of the week; he comments:

“The events that are organised during NCSBW will showcase the many ways people have turned their dream of building their own home into a reality. All the evidence shows that there are millions of people who want to be involved in building a home for themselves in the UK”.

“National Custom & Self Build Week 2014 will give people the inspiration they need to build their own home. With a growing number of custom build solutions now emerging it will particularly shine the spotlight on this new approach to securing a home. But it will also highlight the many ways individuals can deliver a ‘self-build’ and the growing number of community-led self-build opportunities that are emerging” he said.

Over the last couple of years a small army of specialist firms have set up to help people get a custom build home. Some of these companies specialise in finding land and selling off serviced plots to would-be self-builders; others provide a range of home designs that people can adjust to fit their precise requirements. There are also specialists setting up as ‘enablers’ to help community groups build apartments or affordable terraced homes.

Among the many custom build projects already in the pipeline include:

The Chair of the NaSBA, Ted Stevens, comments:

“These projects will help to put custom build on the map during 2014 and should help people build a better understanding of the role custom can play in the future. They will also demonstrate the many ways custom built homes can be delivered.”

“In addition to these developer-led projects there are a growing number of schemes being facilitated or promoted by local authorities – we believe around 50-60 councils are now supporting our campaign to help people build their own homes. And, collectively all these initiatives add up to around 4,000 additional self or custom build opportunities in the future pipeline.”

During the NCSBW there will be series of high-level debates and other events at Grand Designs Live featuring Ministers, alongside TV presenters Kevin McCloud and George Clarke. The winners of the Grand Designs Live ‘Self Build on a Shoestring’ design competition will also be demonstrating how it is now possible to build a modest home for less than £50,000. And one of the days will look at how ‘building groups’ work in Europe, for example, in Berlin, one in ten of all the new homes built are currently being delivered (very cost effectively) by groups of self-builders.

British architect and television presenter George Clarke is a supporter of the week.

“I’m proud to be associated with National Custom and Self Build Week. Self-building your own home has to be one of the most rewarding things you can do in life. It’s an opportunity for people to create something truly unique, a building that that they can truly call their very own.”

A detailed Organisers Handbook is now available to help individuals, schools and businesses associated with the self and custom build sectors to organise their own events as part of the Week. This can be freely downloaded from NaSBA’s website (nasba.org.uk). Over the next few weeks the website will also provide a detailed list of all the national and regional events taking place in 2014. And there are lots of pictures of the activities that happened last year, which you are free to use. 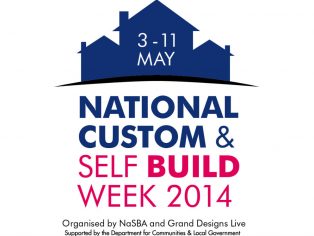