Plans for 2,500 homes and commercial space at York Central get the green light

Blueprints to transform one of the largest brownfield city centre sites in the UK into a vibrant residential, cultural and commercial space have been given the go-ahead by the council’s planning committee, marking a major milestone for York.

The outline planning application for York Central – which includes 2,500 homes, 20 per cent of which will be affordable, and a commercial quarter creating up to 6,500 jobs – is now subject to final approval by the Communities Secretary, Rt Hon James Brokenshire MP.

The York Central Partnership (YCP) members, Homes England, Network Rail, National Railway Museum and City of York Council, have been working collaboratively for the past four years to develop proposals and assemble a £155m funding package for infrastructure works to unlock the brownfield land:

As majority landowners, Homes England and Network Rail will act as master developers for the site.

The scheme, which covers 45 hectares of brownfield land, is one of the largest regeneration sites in England.  As well as enabling the expansion of the National Railway Museum, it will also improve cycling and pedestrian access; create space for new hotels, the country’s first railway park, and a new entrance to the railway station.

In addition to addressing housing challenges, York Central has been identified as the key opportunity to power York’s economy into the future. Regeneration of the site will help to provide the homes the city needs and grow its economy by 20 per cent, making it a significant contributor to the Northern Powerhouse. This will bring York world class commercial office space which will retain and attract higher value employers.

“York is at the brink of one of the most exciting developments in living memory. We are delighted with the news that York Central has been given outline planning permission and is set to transform York into an even more exciting and vibrant city for its residents, visitors and tourists. We look forward to playing our part in the development of such a nationally important scheme which will transform the lives of people, businesses and the local economy for years to come.”

“York Central is truly a once in a lifetime opportunity to transform York and achieving outline planning approval represents a huge milestone towards making these plans a reality. The decision will enable the National Railway Museum to progress our ‘Vision 2025’ masterplan which will see the biggest changes to the museum since we opened in 1975, helping us to reach and inspire the next generation of engineers.”

“This is a massive boost for York and the whole region, and will help to make sure the city remains a fantastic place to live and work. It will deliver a range of homes the city needs, including 500 at affordable rates, and the grade A commercial space to attract a new generation of higher value employers to the city.”

“York Central has been talked about for decades, so we’re proud of the role we’ve played in the partnership which is making it happen. This development is of national significance, but we’ve got to this point because of our commitment to listen to residents and make this opportunity work for everyone in the city.”

The project will be overseen by a Strategic Board, chaired by Dame Mary Archer, Chair of the Science Museum Group to ensure delivery of the long-term vision of York Central, support the city’s economic vision, and ambitions of its people. Board members include Sir Edward Lister, Chairman of Homes England, Sir Peter Hendy, Chairman of Network Rail, Councillor Gillies, the Leader of City of York Council and Councillor Aspden, Deputy Leader of City.

The next stage of the application will be submission for the first phase of infrastructure by the council in summer 2019. Start on site is expected in late 2019, with commencement of housing and offices in 2020. York Central is a long term project, with delivery anticipated to last for 15 years.

The outline planning application can be accessed via City of York’s Council’s planning website https://planningaccess.york.gov.uk/ by using reference number 18/01884/OUTM. 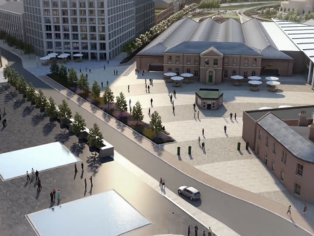