Proposals to replace a former corporate headquarters with a major residential scheme have been approved by planners in Walton-upon-Thames.

The new scheme will provide 375 new homes and will replace the former Birds Eye headquarters which has stood empty on the site for more than a decade.

The existing building, designed by Burnet, Tait & Partners in the early 1960s, is Grade 2 listed but the loadbearing superstructure of the main office building is constructed using pre-cast beams comprising High Alumina Cement (HAC) which was subsequently banned due to its potential for catastrophic structural failure.

A spokesman for Broadway Malyan said:

“A viability report, commissioned by developer Crest A2Dominion as part of the planning application, was independently reviewed on behalf of Elmbridge Borough Council by Knight Frank. This concluded that demolishing the existing buildings and replacing with a new residential development was the only viable option for the site.”

An alternative brief was set, in the form of a design competition, to explore ideas based on a new building.

Through site and context analysis, a proposal was made that reinterprets the formal building geometries to suggest a memory of the existing building.

The idea is centred around a ‘jewel’ building with an enclosed formal courtyard that echoes the existing courtyards but now in the form of residential amenity.

The surrounding buildings offer an architectural counterpoint to the central building through a series of linked brick pavilions. These are also arranged around the mature trees towards the rear of the site.

The design is bound together with a significant landscape proposal for the six hectare site. This also draws on the ordered geometry of the original Birds Eye masterplan. A series of streets and spaces lined with new and existing mature trees and planting within the streetscape provides a legible streetscape for the new residential community.

The existing frontage is reinterpreted through a series of thresholds including a reflective pool and formal landscape. This is bookended with two buildings, framing the frontage and providing ground floor uses appropriate for the public edge to the site. 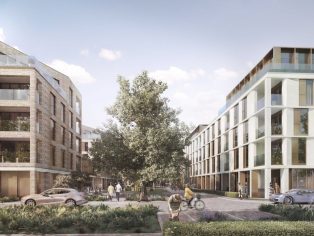 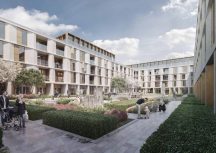