The Development Consent Order application for Swansea Bay Tidal Lagoon has today been accepted for consideration by the Planning Inspectorate.

Swansea Bay Tidal Lagoon will create a new waterfront for Swansea, a focus for water-based activities and a visitor destination in its own right. The masterplan and landscape design for the site, by London 2012 Olympic Park designer LDA Design, creates a ‘Maritime Park’ between Swansea Bay’s beach to the west and Crymlyn Burrows to the east.

As an offshore generating station in excess of 100MW

installed capacity, the project qualifies as a Nationally Significant Infrastructure Project (NSIP) under the 2008 Act. Acceptance of the application means that it has reached the required standards to proceed to public examination before being determined by the Secretary of State for Energy & Climate Change.

“The acceptance of the Development Consent Order application by the Planning Inspectorate is the first step in the process for Swansea Bay Tidal Lagoon.”

“This is a hugely important step in the process that will, hopefully, see us on site in Swansea Bay in spring 2015 with the first power being generated in 2018.

“Through an ongoing process of operational optimisation, we now expect power output for the Swansea Bay Tidal Lagoon to hit 495 GWh per annum, enough to power 155,000 homes.” 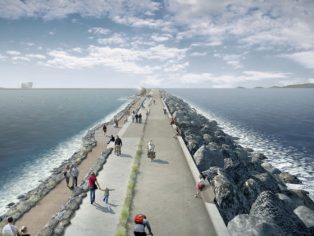