Planning has just been announced for Ensign Court, a housing scheme that will provide 65 new homes for the London Borough of Tower Hamlets. Designed by award-winning architects Maccreanor Lavington, the site is located on the corner of Dock Street and Ensign Street and will be completed in 2017.

The stepped building will be located in the historic urban block that spans from Cable Street to The Highway, a major route through the borough into central London. Ensign Court will significantly contribute to the transformation of this area, from a previously decaying part of London into one of the most desirable new places to live.

The classic brick façade of the building has been influenced by the heritage of the old warehouses formerly located within the area and fits seamlessly into the existing fabric of the neighbourhood. The 14-storey tower steps down on either side to create a structure that integrates well at street level and does not overpower the surrounding buildings. The step down on either side keeps the building at a similar level as that of its next-door neighbours.

On the ground floor, commercial units integrate the building with the local community whilst a first floor cantilever creates an elegant divide between the consumer and residential elements of the property. On the top floor is a roof garden for residents to relax whilst a courtyard has been created to the rear of the site for children to play outside. Ensign Court also features an on-site energy centre and achieved CfSH energy efficiency level 4.

Offering stunning views of the Shard, the City of London and long views to the east from its inset balconies, this mixed-use development is not just aimed at London’s rich investors but features affordable and social housing in generously sized one, two and three bedroom apartments.

The approval of this scheme is yet another sign of the growth of Tower Hamlets, following a recent NLA study which identified it as the London Borough constructing the most tall buildings over the next ten years. Ensign Court will start on site September 2015. 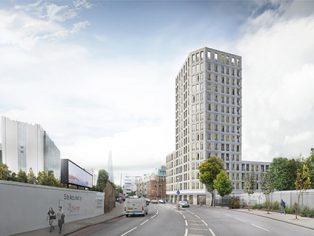