Plans have been submitted for the first building at Birmingham’s Arena Central development, designed by Make Architects.

Fronting Broad Street and opposite Centenary Square, the eight-storey, 140,000 sq ft, 1 Arena Central will include some 135,000 sq ft of Grade A office space with typical floorplates of 21,000 sq ft. The plans also feature provision for 5,000 sq ft of retail units on the ground floor and 68 car parking spaces in a secure basement environment.

The building’s curved façade, which features a contemporary chequerboard motif, has been designed to encourage pedestrian traffic onto the site, forming an extension to Broad Street, with 2,500 sq ft of open balconies on the top floor, providing views over Centenary Square and back over the scheme.

Arena Central is the first step in the masterplan for the 9.2 acre mixed-use site, which is being delivered by Arena Central Developments Ltd (ACDL).

“This is a hugely important step in the development of Arena Central and the creation of a truly mixed-use destination, featuring an office-led mixed-use development, right in the heart of Birmingham City Centre.

“Birmingham’s stock on the global stage has never been higher and it is our intention to deliver a Grade A office space that will continue to attract the very highest quality occupiers to the city and the region, which is particularly important now, given the city’s dearth of office stock.

“Our location adjacent to Centenary Square and fronting Broad Street makes this one of the most prominent active development sites in the city centre and the plans for 1 Arena Central are indicative of the exceedingly high level product that will feature across the development.”

“Arena Central is a striking new office building located in an amazing site opposite the new Library of Birmingham. It marks the entrance to a critical new development in the heart of Birmingham, adjacent to a new prominent piece of urban realm which will significantly increase the pedestrian connectivity across the city.”

“We are delighted to be working in Birmingham again. The opportunity to set the standard for Arena Central with the first office building and be able to contribute to one of the cities principal public spaces, Centenary Square, is just incredible.”

“Arena Central represents a key opportunity to unlock a prime piece of development land right at the heart of the city centre. Birmingham is continuing to reinforce its reputation as a centre for high quality, blue chip occupiers, but in order to ensure that we are able to meet the growing demand for office space in the city, it is essential for that we encourage the development of forward-thinking schemes such as Arena Central.”

Clearance work on the site is already underway with further demolition of the remaining buildings due to commence shortly and work on 1 Arena Central and the new public realm set to start in early 2015. 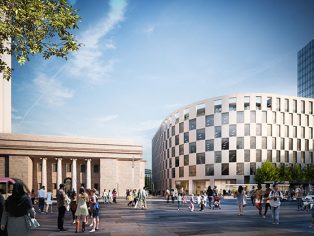