Work to transform the second of three platforms at Moorfields station will take place from 4 January 2016.

Network Rail is investing £12 million to upgrade the station’s platforms and escalators to provide passengers with an improved facility to serve Liverpool’s main business district.

The upgrade will mean platform 1 (southbound, Northern line) will be temporarily closed meaning trains for Liverpool Central and Hunts Cross won’t stop at Moorfields until the work is completed in spring 2016.

The station, which is operated by Merseyrail, is the latest on Merseyside to be redeveloped as part of a wider £40 million investment by Network Rail, working in partnership with Merseytravel and Merseyrail, to provide a better railway for the increasing number of people travelling by train. It will be completely refurbished but the station will remain open throughout the work.

Improvements will be made to platforms, walkways, and the upper and lower concourse areas. There will be new flooring, fresh enamel cladding on the walls and brighter lighting, which will give a cleaner, more airy and less cluttered environment. Nine of the station’s escalators will also be refurbished to improve their reliability and lifespan. They currently carry 6.5 million passengers a year, a number which is predicted to continue to increase.

“The upgrade of the first platform has made a huge difference to the look and feel of the station. Its modern look will be replicated to the remaining two platforms, completing the upgrade of the underground stations in the Merseyside area.

“The investment is part of our Railway Upgrade Plan to provide passengers with a better railway and modern stations in Merseyside that they can rely on and be proud of.

“Again we have carefully planned the work with Merseyrail and Merseytravel to limit disruption to passengers as much as possible and, by closing one platform at a time, we are able to keep the station open and keep all trains running. I thank passengers for their patience while we complete this work.”

‘While we appreciate that the temporary closure of a platform is not ideal for passengers, we are sure that people will like the refreshed, lighter and brighter environment and see a real difference once it’s finished next year.

“Moorfields is the last of our five underground stations to get a make-over, and completion of them all will be great news for Liverpool, for our partners, Network Rail and Merseytravel, and above all, for our customers.”

“With passenger numbers using Moorfields set to increase, these improvements will provide an impressive gateway, making the station much more attractive and more accessible now and in the future.”

Moorfields is the last of the five underground stations to be refurbished as part of Network Rail’s £40 million investment. The other stations were Liverpool Central, James Street, Lime Street and Hamilton Square. 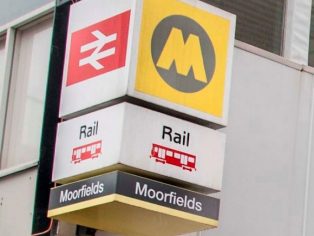