The £7.6 million Church of England Primary School, built for the Diocese of Southwark and Royal Borough of Greenwich, features a robust design methodology that incorporates “playdecks”, increasing its pupil size from One Form Entry to Two Form Entry with more than double the original teaching space.

The design was inspired by multi-storey ’London Board’ schools, which often utilised play space on the roof level to allow children to play away from noise and pollution. This approach has met the challenge of delivering a complex building within an acutely contained site.

Inside the building, Pellings’ consultation with the school is made evident by the attention to detail. The pupil age groups of the classrooms rise as ones ascends each floor, with the height of sinks and cloakroom facilities increasing accordingly. Shared spaces such as cloakrooms and breakout areas are situated between pairs of classrooms, maximising use of space.

The main hall is a dominant feature of the design, functioning as a buffer between the noisy road network and the teaching and play spaces. A modern interpretation of the church stained-glass window is incorporated into the new building and reflects the school’s dual identity as a place of both worship and education. At night, it is particularly spectacular; the hall becomes a beautifully lit local landmark, creating a lasting image for both the school and community.

The use of playdecks allows children to play safely in close proximity to their classrooms and challenges the norm of children being ushered towards one central playground or school hall during break periods. This breakthrough multi-storey approach has produced a 230 percent increase in floor area, enabling the school to meet demands and operate more efficiently.

Neil Werner, Head of Architecture at Pellings LLP, explains that the design approach applied to the St Mary Magdalene School has potential for use elsewhere as urban real estate continues to be a rare commodity.

“Many Victorian schools, such as the one which sat on the original site, were built to meet the growing demand for primary school places in inner city areas. Generations on and demand is still growing and urban space is still limited. We believe the innovative ‘multistorey’ approach will offer an efficient solution to meet the modern challenges of delivering schools in urban areas.”

Built in 1877, the original Victorian school building was quickly becoming unfit for purpose, suffering from a poor sustainability record coupled with deficient lighting and ventilation. The new building has been equipped with a natural ventilation system featuring night cooling technology; sensors operate louvres which provide ventilation during the day.

In the summer, the system works to purge the building of heat during the night, using cool outdoor air. Compliance with the Department of Education’s Building Bulletins is achieved (for cooling the building without mechanical ventilation), resulting in considerable capital cost savings and a reduction in the building’s carbon footprint.

The school incorporates sustainable features such as green roofs, grey water recycling, and high levels of insulation. Photovoltaic panels generate electricity, cutting emissions by an estimated 10 percent. As a result, the building is BREEAM rated “Very Good”. A wind turbine has also been incorporated for educational purposes, used for teaching the children about the benefits of renewable energy pertaining to both their school and the environment.

Central to the project was delivering a community and public benefit. Greenwich is listed as the 10th most deprived borough in London and Woolwich Riverside’s steep crime rate of 16.37 percent is very nearly twice the wider borough average of 8.88 percent. Unemployment in the area stands at 16.3 percent and the child poverty rate is 37 percent. Apprenticeships, shared facilities and community initiatives are among the many valuable by-products generated by the school project.

The Southwark Diocesan Board of Education and Greenwich Council were jointly responsible for the success of the project and there was a high level of involvement by the school governors and staff throughout. The project had many stakeholders, whose consultation was a theme from start to finish; sessions took place with pupils, teachers, Governors and local residents to ensure that everyone’s needs were listened and catered to. 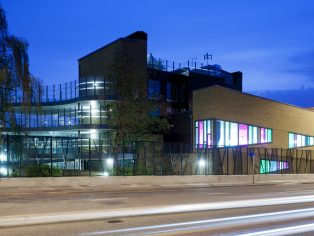