Pellings, a multi-disciplinary architectural, property and construction practice has completed an expansion project for Danson Primary School, in Welling, South East London, increasing its pupil in-take from a two- to three-form entry.

The school is situated in the London Borough of Bexley and the project has resulted in the building of nine new classrooms, which is two more than is typically needed for a one-form entry expansion. The total number of class-rooms at the school has increased from 14 to 21.

The new classrooms are incorporated into a new two-storey block built over an existing car park and part of a school field that necessitated the demolition of  an old sports pavilion to make way for it. The new block also includes changing room space, large and small group rooms, toilets and a meeting room for staff.

There is a single-storey link to the existing school buildings which contains a new head teacher’s office, school office and a parent room. It also has a new entrance to the school within it.

The new block was designed with a brown brick facade mirroring the school’s existing buildings. The extension was constructed using a SIP System where the external brick face and timber frame building along with construction panels were manufactured off-site and brought onto the site as a kit.

“The SIP System allows for greater efficiency and flexibility than the more traditional modular off-site construction method. This is because with the SIP method there are more panels to each facade allowing for a greater variety of design.”

“The SIP system also allows for greater speed of construction and in this case, the extension went from foundation to roof in just eight weeks with the brickwork being put in place at the same time as the mechanical and electrical systems were being incorporated and the interior walls plastered.”

“Because of our multi-disciplinary contractor and QS role any contract variations were able to be put into effect with much greater speed than if they were being carried out by different organisations.”

One of the elevations has a decorative brick panel and had some areas of rain screen cladding made of profiled aluminium. There are composite windows made of aluminium and timber.

In addition to the new building, the main school hall has been enlarged by about 250m2 and incorporates a full height window. A new hard play area was also built.

Pellings, while designing the new school block, identified issues including a leaking roof on the existing building  and a need to resurface the playground which necessitated an additional project management role.

The contractor was local company Apex Contractors, which is on the London Borough of Bexley’s approved contract list. It won the tender having been evaluated 60 per cent on price and 40 per cent on quality. They were one of five tenderers. Sub-consultants were used for the electrical and structural engineering. 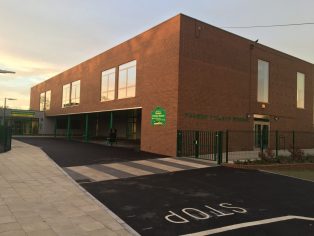