Over 33,000 people now signed up to Right to Build registers

New research by the National Custom & Self Build Association (NaCSBA) has found that since 1 April 2016 over 33,000 people have signed up to Right to Build registers across England.

This is more than an 80 per cent increase on this time last year, at which point 18,000 people had signed up.

Local authorities across England must give permission for enough serviced plots to meet the growing demand under the responsibilities placed on them by the Right to Build legislation. The deadline for consenting the 33,000 plots demanded is 31 October 2020, with around half to be consented by 31 October 2019.

It was also revealed that around 3,000 people have been removed from the registers by local authorities for a number of reasons including people having found plots, councils applying local connection tests or introducing a fee to join or stay on the register. NaCSBA is monitoring whether any local authorities are using unreasonable or unjustified local connection criteria or charges as a means of reducing their obligation to consent.

According to the NaCSBA, the registers will play a vital role in assessing the demand for serviced plots. Councils are also under a duty under planning policy to consider how many people in their borough would like to design and build their own home over a longer timeframe, to tie in with longer term planning functions.

Building Societies Association (BSA) research found that 53 per cent of people have the ambition to design and build their own home at some point in their lives. NaCSBA believes that “as people’s awareness of self- and custom-build grows, the number on the registers should more closely reflect the BSA research”. It is therefore planning a national consumer campaign in 2018 to increase awareness of the Right to Build registers and make people aware of their rights under the legislations.

Michael Holmes, chair of NaCSBA, commented on the figures: “Over 15,000 more people joining the Right to Build registers is extremely positive given that last year’s figure of 18,000 was obtained after only seven months of most registers launching. However, despite the increase, the promotion undertaken by councils varies hugely. Those that are proactive are reaping the benefits custom- and self-build housing can bring to diversify and grow local housing supply.”

Richard Bacon MP, chair of the All Part Parliamentary Group on Self-Build, Custom and Community Housebuilding and Placemaking, said: “I’m delighted to see that the number of people on the Right to Build registers has now grown. However, we know that true demand is much higher and more needs to be done to promote the registers and really make them work as an evidence tool in local planning.” 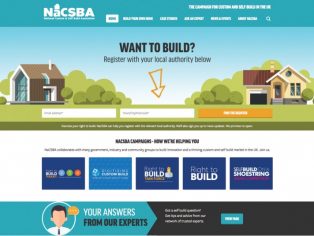