Orange ceiling and wall systems by Armstrong feature on a flagship office building.

Ceiling and wall systems by Armstrong have provided form AND function for an award-winning Grade A office building at the heart of one of the largest regeneration projects in the UK.

Armstrong’s R-H 200 standard perforated metal hook-on planks with acoustic inlay within a concealed grid, were specified by regular Armstrong users Falconer Chester Hall Architects for the feature ceiling of the atrium of the Kingsgate building at Birkenhead in Wirral Waters which was built at a cost of £11.4 million.

They are complemented by Armstrong’s W-H 1000 standard perforated metal wall system on the four-storey walls, hooked on in a vertical brickwork pattern to match the ceiling. Both of these systems were supplied by Armstrong in bespoke sizes to aid installation … and in bright orange!

The metal tiles in the atrium are complemented by Ultima+ OP Tegular mineral tiles and Ultima+ SL2 planks in the open-plan offices and circulation areas. This ceiling system (and the suspension grid too) is Cradle to Cradle (C2C) certified in line with Kingsgate’s BREEAM “Excellent” rating.

Manufactured with up to 64 per cent recycled content, the Ultima+ range is available in three core densities that allow specifiers to engineer sound absorption and attenuation for optimum acoustic performance – standard Ultima+ giving medium density, Ultima+ OP giving low density (both of these variables were used at Kingsgate) and Ultima+ dB giving high density, up to 41 dB.

Stephen Fieldsend of Falconer Chester Hall said the Armstrong systems were specified to reduce acoustics in the open plan office areas which serve as the core business for The Contact Company in its role as a contact centre and in the main atrium with its feature wall and ceiling.

“We have worked with Armstrong continually on office developments. On this one particularly the Armstrong materials interface fantastically well with the other materials used on the project. We had continual help from Armstrong for the visual aesthetics to the main atrium space.”

Their brief had been to design an office building of almost 5,000m2 that would set a standard for future development within the regeneration area and also meet the aspirations of both the developer (Longmeadow Estates) and their prospective client.

Flexible open-plan office spaces allow greater flexibility for the call centre which takes up three of the four storeys, with offices and meeting rooms on the top floor.

While its design concept references Liverpool’s past and the trading vessels that once negotiated the waters on its doorstep, the building remains forward focused on sustainability.

A heavily glazed façade reduces the building’s reliance on artificial light and this element is further helped by Armstrong’s Ultima+ tiles which feature an even brighter whiter smoother surface that gives 87 per cent light reflectance to help achieve 16 per cent cost savings compared with indirect lighting*.

“The building has transformed a plot of empty derelict land into a modern, environmentally friendly office development, having been designed to meet the BREEAM Excellent standard for sustainability. All specified materials have significant green credentials.”

“It has been described as a `strategic flagship development’, and is the new home of one of Wirral’s leading employers – helping to secure their future in the locality and providing a statement of confidence in a new enterprise zone. Another indication of its success is that it was finished on budget and two weeks early, demonstrating a rigorous approach to providing value for money and to construction timetables.”

Built on former dockland in less than a year by Eric Wright Construction of steel frame and concrete floors, the building’s ceiling and wall systems were installed over three months by a team of eight from specialist sub-contractor CLM Drylining.

Kingsgate (formerly the Tower Wharf project) is one of the first flagship schemes to be constructed within the 500-acre Wirral Waters regeneration scheme, part of the Mersey Waters Enterprise Zone which was one of the first four locations established by the Government designed to attract investment and accelerate growth.

The £10 billion development comprises two schemes led by the Combined Authorities and local authorities – Wirral Waters and Liverpool Waters. Located on either side of the River Mersey at Liverpool’s famous docklands, the two projects are among the largest regeneration schemes in the UK.

“This high-quality office development, built on a former derelict land site, has added much-needed Grade A office accommodation to the Wirral Enterprise Zone and brought around 400 jobs to the area. Judges praised the project team — Longmeadow Estates, Eric Wright Construction and Falconer Chester Hall — for kick-starting the Wirral Waters Regeneration Project with such an exemplary building whose design echoes the shipping heritage of the area.” 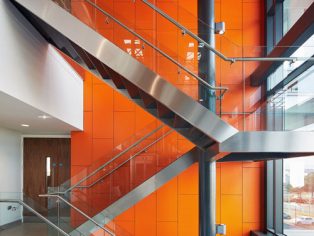