One in Five Voters: ‘Housing an Election Issue’

One in five (20%) English adults say that housing is one of the most important election issues – that is the headline of research commissioned by architecture, urbanism and design practice Broadway Malyan.

The fieldwork has been conducted by international market research firm YouGov. A total of 4,510 interviews were conducted with adults in England in April 2015.

The ‘50 Shades of Green Belt’ report reveals that –

1. Housing is one of the most important issues in the election for prospective voters:

Of this group, two-thirds (66%) report that they are more likely to vote for a party which priorities house building (ranging from 74% in the East of England and 68% in London to 57% in Yorkshire and the Humber)

2. Opinion is balanced on which party has the best policies for delivering new housing in Britain:

Just over one in five (21%) believe that the Conservative party has the best policies, with the same percentage citing Labour (4% name the Liberal Democrats, 4% the Greens and 3% the UKIP)

3. Regions are divided on which party has the best policies for delivering new housing in their local area:

4. It is difficult for local people and first-time buyers to buy or rent homes in their local areas:

5. There is strong support for an increase in new house building in England:

Over two-thirds (67%) believe the number of new homes built should be increased (ranging from 73% in support of an increase in London to 61% in the West Midlands), with over two-fifths (41%) reporting that there should be a significant increase

6. The majority support the continued protection of Green Belt land:

Over two-thirds (67%) oppose house building on Green Belt (ranging from 72% in the West Midlands to 55% in London).

With Green Belt described as areas of countryside around some towns and cities, which are currently protected from most building to stop urban sprawl

With brownfield land taken as meaning land that has previously been built on, such as derelict buildings and former industrial land

8. Opinion is more divided on house building on greenfield land:

With greenfield land defined as land that has not previously been built on, such as agricultural land outside Green Belt

“The research suggests that housing is one of the most important issues for prospective voters in the up-coming General Election. However, while there is strong support for new housing, there is strong resistance to building on Green Belt land.

“It also suggests that there is a lack of understanding on what the Green Belt is and its role, shown by the significant difference in the proportion of those who favour house building on greenfield sites over Green Belt land when, on the ground, they are broadly the same – they are open, undeveloped land.

“Pledging hundreds of thousands of new homes is only half a policy and political parties must also pledge the land required to build them in order to be credible.

“Brownfield-first policies have systematically failed to supply the required level of housing set out by the Government and, as a result, house prices continue to soar, homeownership is falling rapidly and homelessness is rising.

“Green Belt regulations were introduced in the 1940s and cover up to 13% of the total land in England. In the current climate the policy is outdated.

“The common assumption that all Green Belt land is attractive, accessible and ecologically rich is simply not true. The Green Belt is best thought of as a spectrum, ranging from Areas of Outstanding Natural Beauty to unremarkable areas of scrubland. We must look to these lower-quality areas to build vital new homes, while protecting our most valuable areas of countryside.

“If we are to meet housing demand in England, it is essential the next Government carries out an assessment of Green Belts and takes a more strategic planning approach to cities with Green Belt policies – potentially through city-region plans to help properly plan for future housing and economic growth.” 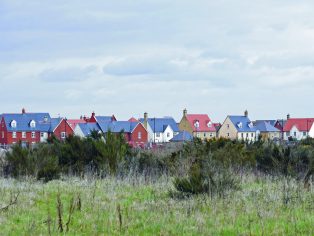