This month has been one to celebrate for the X-LAM Alliance, with a flurry of awards being presented to many of its latest and most innovative projects. B & K Structures, the UK partner of the X-LAM Alliance, is proud to be a part of such award winning teams including prominent architects and engineers from Hawkins/Brown, Arup Associates, AHR and Engenuiti.

As well as winning awards, four of the companies projects have reached the final of the Celebrating Construction Awards. The teams will be heading off to the inaugural East Midlands Awards which will be taking place at the Nottingham Belfry on the 19th June 2015.

BSkyB Believe in Better Building has been commended not once, but four times this month – winning the Best Building Award at the Institute of Civil Engineers for Arup Associates and winning the WAN Wood in Architecture Award, as well as being shortlisted for the East Celebrating Construction Awards. This new educational facility for graduates, apprentices and staff training was designed to reflect the company’s sustainable aspirations. Based at the Campus at Osterley, West London, the 3,000m² development encompasses a three storey linear building with an additional storey accommodating a restaurant and roof terrace – all providing an inviting multi-functional amenity.

Keynsham Town Hall also declared multiple victories – taking home the award for Best Corporate Workplace as well as being named Innovation Nominee at the British Council for Offices Awards. But that was not all for Keynsham Town Hall! This outstanding build was also announced winner of RIBA’s South West Sustainability Award. The £34 million redevelopment included the demolition of the existing Town Hall, outdated 1960’s shops and the library – replacing the buildings with new low carbon council office space for 688 people, 20,000ft2 retail spaces, a new library and a one-stop-shop for council and other public sector services. Sustainability was a key aspect of the scheme. Energy efficiency was built into the design which was specified to achieve the top DEC (Display Energy Certificate) ‘A’ rating under the Governments Energy Performance Certification scheme. This is the highest rating possible and is given to buildings producing the lowest CO²emissions – only a small percentage of office buildings have ever received this accolade.

Banyan Wharf celebrated Outstanding Architectural Merit at the Evening Standard New Homes Awards for architects Hawkins/Brown. This record breaking timber tower has also been shortlisted for both Project of the Year and Innovation at this year’s East Celebrating Construction Awards. The design and construction of Banyan Wharf required high levels of technical advancement, innovation and rigorous planning through a strict programme of works, as well as the use of BIM technology and CNC machines, to overcome the challenges that were presented to finish the build on time. A complex hybrid steel/CLT structure also makes this one of the most unusual medium rise apartment developments in London. 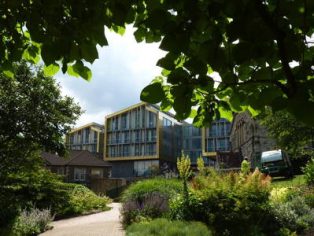