London-based practice Office for Architectural Culture (OAC), led by Charles Phu, has won the design competition for the regeneration of an area of approximately 300 hectares in the heart of the City of Xi’an, China. This mixed-use project covers part of Daming Palace Heritage Park, a UNESCO World Heritage Site, as well as the site of the large early-20th Century Dahua Wool Spinning Factory.

Xi’an, home of several UNESCO Heritage Sites including the world-famous terracotta warriors, is considered the historical and cultural capital of China. It was the capital for 13 Chinese imperial dynasties, including the most powerful ones such as the Qin, Han, and Tang Dynasties, and was the world’s first city to reach a population of one million in the 7th Century. It was the most important and influential city along the ancient Silk Road and Daming Palace, the imperial palace of the Tang Dynasty (618 – 907 AD), was the political and cultural centre of Silk Road cultures at its peak. With its 3.11 km2 area, it is the biggest known imperial palace complex in the world.

In OAC’s design proposal, the core area of the project, which will be the first phase to be developed, is an area of approximately 580,000m2. It has a mixture of developments including culture-themed retail, galleries, class-A corporate offices, creative offices and live-work studios, two five-star hotels, apartments and large public outdoor spaces. A 12,000m2 Silk Road Museum is proposed, part of which falls in the Daming Palace Heritage Park. The museum will form a centre and platform for cultural exchange across Eurasian continents, along with an adjacent area where bi-annual global expo events showcasing cultures and art will be held.

‘’At the beginning of design process we realised that this urban regeneration project, because it includes part of the Daming Palace Site, meant a profound responsibility for the architect to integrate the urban, historical, cultural and archaeological contexts and transform this into a liveable environment. So, how to address both the macro and micro scales of the regeneration became a key to our concept. Our response connects the medieval Tang Dynasty’s civilisation, Silk Road/Eurasian culture and influences, last century’s industrial achievements, the present and the future. Whilst aiming to bring the site’s already world-famous status to the next level, I believe that it is even more important to encourage people to interact and enjoy a socially and culturally sustainable, human-friendly urban environment by breaking down the scales of buildings and spaces and providing freedom of movement and experience to pedestrians’’.

The design proposal also includes a 300-metre tower. This follows in the tradition of beacon towers which once helped way finding along the Silk Road and, by providing multiple storeys for offices and apartments, will release area around it for public realm and low-density, pedestrian-friendly environments and buildings. The tower will also accommodate a series of sky garden lobbies and an observation deck.

The urban structures of the regeneration areas in OAC’s designs refer to the principles of primeval settlements, which can still be found in many villages and towns across Eurasia. ‘’People, not vehicles, should be the master of the place where they live, work and play. Our aim is to counteract the wide-spread trend of urban developments dominated by cars. I knew this would be a big challenge for Xi’an as well as for China and many major cities around the world but I believe that, in order to construct something, you sometimes need to ‘break the rules’ and challenge trends. It is not only about the grand vision; it is about human wellbeing. It is more than a design or urban issue; it is a social, human issue.’’ 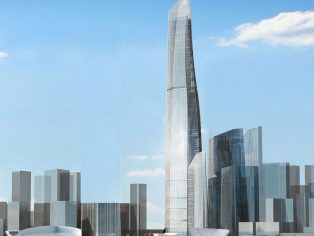 View from palace to core area 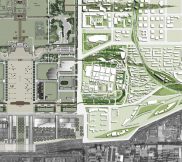 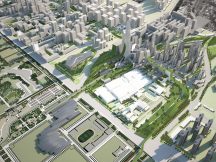 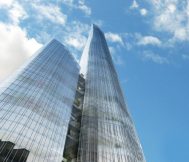