3DReid’s vertical ribbon of lights has been selected as one of only four designs shortlisted in the first ever competition for the redesign of Oxford Street’s word-famous Christmas lights.

Based on the concept of the Northern Lights (Aurora Borealis), 3DReid’s design uses a continuous, linear, colour-shifting light field to create an artificial ‘aurora’ that cascades down the unique shopping street and brings a special feeling of northern-ness to the heart of Christmas London.

The design has two main elements, a ribbon and a star field. The ribbon uses 500,000 fully addressable, three colour LED luminaires to create a never-repeating continuous geometry that curves smoothly around street obstacles such as trees or lamp posts. At each of five ‘gateways’, the ribbon takes a more flamboyant path and its programming changes, providing a strong sense of arrival for visitors.

“Where traditional Christmas light installations are horizontal, either spanning the street with intermittent banners or shapes, or putting a lid on the street like a ceiling, the main part of our design is a long, vertical ribbon. Because of this geometry, the many rich facades and storefronts of Oxford Street – often themselves illuminated – remain unobstructed and are allowed to make their own contribution. The continuously curving path encourages visitors to enjoy the whole length of Oxford Street, to appreciate its scale and the variety in its unity.”

In addition to the main ribbon ‘aurora’, the installation has a background ‘star field’ of suspended lights. Much less dense than the ribbon; the star field both contributes to the aurora effect and offers an opportunity to mix in some ‘Christmas eggs’. These consist of a variety of illuminated characters and shapes, some with a Christmas theme, some with a gift theme (by district) and others that are … less expected. Visitors can travel the length of Oxford Street to spot them, inviting exploration of the wider district.

With an installation lasting October through January – almost a quarter of the year – the Oxford Street lights unavoidably have a presence extending well beyond Christmas and can be subject to the traditionally reported ‘festive fatigue’. 3DReid’s design contains a planned and adaptable programme for the whole ‘winter lights season’, celebrating festivals such as Diwali and Hanukkah and national events such as Remembrance Sunday, whilst framing Christmas at its centre.

Launched by RIBA and Oxford Street and led by New West End Company, in conjunction with Transport for London (TfL) and Westminster City Council, the competition asked lighting designers and architects from the UK and beyond to design the most inspiring and innovative Christmas lights. The designs will be judged by an internationally esteemed panel and the winner will be announced in May 2018. 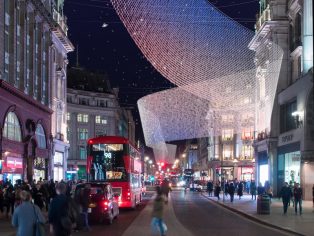 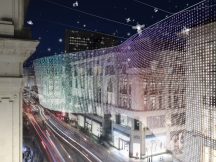