A beautiful and historic yet remote and weather-exposed building has been given a new lease of life thanks to Norscot, fabricators and installers of state-of-the-art PVC-U window systems from The VEKA UK Group.

Abden House in Dornoch, on the east coast of the Scottish Highlands was built in the 1890s to house the vast art collection of a wealthy businessman. Later it became Ross Hostel, then Ross House, today acting as an occupied college and office building – part of the University of the Highlands and Islands’ North Highland campus.

“As is so often the case with old buildings, Ross House’s existing timber-framed sash and casement windows were in a state of decay, and far past their best in terms of thermal insulation and weatherproofing. We tendered for the job through Public Contracts Scotland and were pleased to win the contract on the strength of our ability to independently manage both fabrication and installation, and our offering of industry-leading window systems from VEKA.”

“Working with educational institutions often holds strict time implications for contractors, dependent on term dates and the seasonality of the academic year. I’m pleased to report that we were able to deliver the entire 95 window project in the month from May to June, causing as little disruption to the college’s staff, students and visitors as feasibly possible.”

Norscot liaised closely with the college’s Estates Manager and people who regularly use the building, to determine the details of the systems recommendation. Callum continues,

“It was important that the new windows were styled sympathetically to the heritage of Ross House, especially as certain historic internal features of the building were specified to be retained”.

“Following a comprehensive on-site survey, 92 Tilt and Turn windows were fabricated using VEKA’s M70 profile. The versatility of the system, both in terms of its non-intrusive styling and flexible methods of opening made it ideal for this job. The remaining three windows included two fixed casements and one circular ‘bullseye’ window, again using M70 profile, foiled white both inside and out.”

Norscot is joint holder of installer support organisation, Network VEKA’s Best in Scotland for Customer Satisfaction award. The company prided itself on attention to detail in the installation phase, as Callum describes:

“To satisfy the college’s specification to retain timber ingoes (the internal surrounds where walls are stepped-in to meet a window frame), we pre-finished the required materials in white paint at our factory. This meant we could ‘sign off’ full rooms each day, as opposed to installing the windows then waiting for a painter to complete the job. A first class fit and finish was ensured, while minimising inconvenience to building users.”

“We couldn’t be happier with Norscot’s work and the VEKA windows they have produced and installed. It’s always a concern with period buildings such as Ross House that any kind of refurbishment will sap their history and character. That outlook, however, leaves you burdened with the upkeep of traditional fixtures and fittings, including windows that have long been surpassed in terms of energy ratings, acoustic insulation, security and weatherproofing.”

“This installation has given us the best of both worlds: a modern window system that offers unbelievable flexibility compared to the old timber-framed units, yet still complements this building of over 100 years. Being in a coastal spot, our staff and students are already feeling its benefits on cold, blustery days. We can’t wait to feel the difference when the winter comes!” 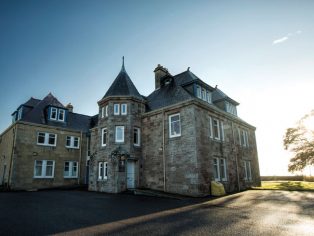