Situated on the border of a working farm in Suffolk (UK), the Reydon Grove Farm has been designed as a long and narrow flat roofed pavillon, to give the building a sufficient magnitude and scale to correspond sizes of the existing barn and the old dairies on the site.

The internal layout of the bungalow has been designed in two main sections, divided by the central hall – a semi public section (living room, dining room, open kitchen) – and a private section with bathrooms and bedrooms. Approaching the bungalow from the main path in the garden, it will lead to the central ramp that leads to the front door in the middle of the house. Through the front door is a spacious hall with a wood burning stove and a view through the house, looking at the trunks from the trees separating the house from the meadows. To the North West one half of the bungalow is designed as one big room, divided into different areas with different functions. The living room and the dining room is dived by a central brick core with a wood burning stove that makes a division in the large room between the functions. In the same way the kitchen with all the built-in utilities devides the kitchen area from the hall. Towards the more closed and shadowy South West corner of the property under the big trees is the more private area of the house, containing the bedrooms and bathrooms. The access to the different rooms is through a long gallery hallway alongside the South / South West façade, giving privacy to each room and giving a shelter to the rooms from the sun. The rooms are thus more open on the East side of the house with their individual framed view to the meadows. With the central hall, the long gallery and the big multi-room, there are 2 main axis in the bungalow defining the layout and providing long and unbroken views from one end of the house to the other – also letting nature visually in to the building.

The bungalow has been designed as a long and relatively narrow structure on the border of the site towards the East, partly to give the building some magnitude and scale that can correspond with the size of the existing barn and the old dairies on the site – and partly to frame the site together with the existing structures for the proposed new garden.  The long structure also perfectly conveys the transition from the meadowlands to the cultivated farmland and enclosed garden. The orientation of the bungalow beautifully frames the views of the meadows towards the east and lets in the morning sun, and it frames the views of the garden and cornfields towards the west and lets in the afternoon and evening light. Towards the North East the facade has strategically placed openings, framing certain views from the different spaces of the house and towards the west the façade is more open with big glass panels, making a smooth and more invisible transition between inside and outside. The house is lifted on a slightly elevated plateau that serves to lift the building slightly to a level that matches the gentle slope of the site from the East towards the West which provides the interior with a view over both the gardens and the fields in the horizon. The plateau also becomes the point of access to the veranda with the steps corresponding with the existing paths and axis to the site.  The large overhang of the roof and the thin fascia board is to make the building as light and airy as possible.

The bungalow is to be constructed in wood beams with a vertical cladding in local Larch to correspond with the vertical wooden cladding on the existing structures on the site, creating a harmonious meeting between the old and the new buildings. The window frames and as well as the fascia board of the roof are to be a dark carbon grey metal to make the steel as subtle and discrete as possible and let the wooden character of the house be the dominant expression. The two chimneys of the bungalow are to be made from dark grey handmade bricks in varying shades of grey to make it match the varying grays of the wooden cladding. 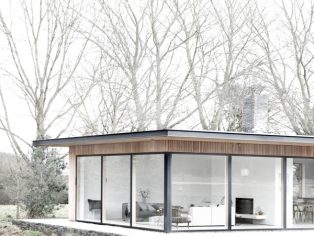 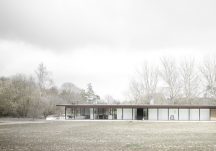