Acoustic expert Jacksons Fencing has released an in depth report (‘Cutting through the Noise’) on environmental noise pollution in the UK.

Informed by the views of 650 architects, specifiers and noise consultants and 2,000 UK residents, the findings paint a picture of a population frustrated by unwanted noise and an industry that needs to do more to keep up.

The research finds that the negative effects of daily clangour are widespread with nearly half of the population having trouble sleeping (48%), 42% feeling irritated and a further third struggling to concentrate. Noise is so disruptive that it has prompted 5 million Brits to move house (6% of the adult population).

48% of professionals say that noise pollution is getting worse. Worryingly, over half of respondents are not seeing acoustic barriers regularly specified for new housing developments (52%). This figure increases to 79% for existing housing, suggesting that little importance is being placed on refurbishing current stock to combat noise pollution.

Kerb appeal
While acoustic barriers are specified primarily for their effectiveness (by 97% of industry professionals), aesthetics are not far behind (91%), followed by cost (90%). Homeowners and other clients, however, are put off by the appearance of barriers, according to nearly two-fifths of respondents (37%).

“It’s not enough to think of acoustic solutions as strictly functional. As significant parts of a landscape, architects and specifiers need to think about how barriers fit in, adding to rather than detracting from their surroundings. By being aware of what acoustic barrier materials are available, professionals can choose the best fit for a project, whether residential, commercial, industrial or otherwise, and its noise reduction and decorative needs.”

Of the most commonly used materials, industry respondents highlight earth (78%) and timber (66%) as the most effective at reducing noise, over Perspex and acrylic (50%) and steel (49%).

Sustainability
Noise pollution’s negative impact on health is second only to poor air quality. The ever growing trend towards eco-conscious design should include measures to mitigate against high levels of noise. Acoustic barriers can contribute to this, with 71% of industry professionals saying they add to a development’s sustainability.

Despite this, over a third of respondents (35%) indicate that environmental noise is either considered too late or not given any consideration during construction projects.

“Given the serious and growing impact of noise pollution, more work needs to be done not only to minimise its negative effects now, but for the future. Our research shows that solutions should not be considered on a purely functional level, otherwise they will not be regularly adopted. To reap the benefits, architects and specifiers need to start thinking of noise mitigation as an integrated design element, rather than a bolt-on to be added after a build is complete.” 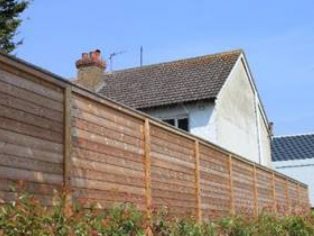