The Nine Elms Vauxhall Partnership has been named Public-Private Partnership of the Year in the MIPIM UK/Estates Gazette Awards. The Awards recognise developers and their public and private sector partners for their contributions to revitalising cities and towns across the UK.

The Nine Elms Vauxhall Partnership is the most significant body of its type in the UK today, responsible for co-ordinating the activity of multiple landowners and public authorities – committed to delivering a lasting legacy for local communities.

The Partnership, established in 2010, includes over 200 people and is arguably the largest body of this nature in the UK; comprising of world-class developers, two local councils – Wandsworth and Lambeth, Transport for London and the Greater London Authority. Developers include Ballymore Group, Battersea Power Station Development Company, Barratt London, St James Group, City Grove, CLS Holdings, VINCI St Modwen and Wanda One (UK) to name a few.

Notable highlights for the Partnership have included:

Already home to Battersea Power Station and New Covent Garden Market, Nine Elms on the South Bank will also become home to the new U.S. Embassy and new Embassy of the Kingdom of the Netherlands and a new town centre at Vauxhall. Underutilised industrial land is making way for new public squares, parks, schools, Tube stations, homes, and businesses, which will drive growth and create jobs and homes.

“From securing a £1bn financial guarantee from the Treasury, to planning a district-wide network of parks and gardens – this partnership has proved it can deliver. The regeneration of Nine Elms on the South Bank will open up new part of central London and will leave an incredibly valuable legacy for local communities. Our partnership approach is highly effective and a model others can follow.”

“This award is recognition of genuine collaboration between the Nine Elms Vauxhall Partners and our ambition not only to deliver a fantastic new district for London but also a wide range of benefits to local people, including jobs, two new town centres, improved transport and new green space.”

“We are very proud to have won this award, which highlights our commitment to creating a modern, sustainable and dynamic new district in central London. We very much hope that it will be a model adopted by other redevelopment schemes in the future and would like to extend our thanks to MIPIM UK/Estates Gazette for recognising our achievements.” 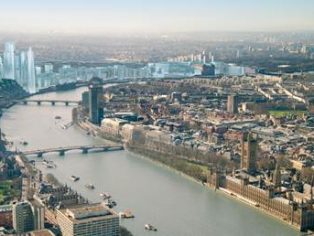